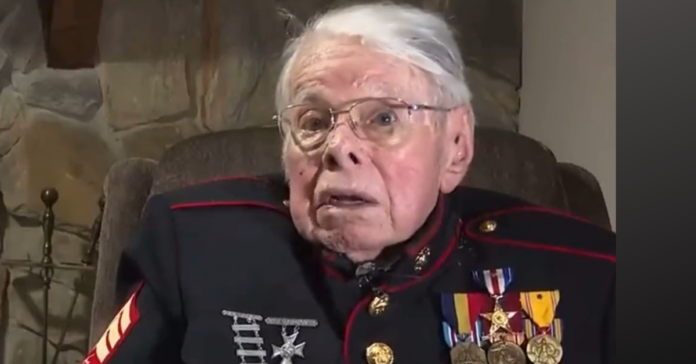 Carl Spurlin Dekel, a WWII veteran, went viral celebrating his 100th birthday with a message everyone in America needs to hear. He said:

“The most important thing in my life was serving my country. I don’t think I could take away from that. They shipped me straight out to Guantánamo, which was a Navy base, and put me in a machine gun company.

“It was an honor for me to serve my country and if I had to do it again and I was the same age. I would do it. I guarantee you.

“We were scared all the time.

100-year-old Marine Sergeant and WWII veteran Carl Dekel and his generation saved freedom. We will continue to defend liberty! pic.twitter.com/hqSObs5QRH

“I don’t care what anybody says.

“We were vulnerable all the time, since Pearl Harbor, particularly.

“People don’t realize what they have.

“The things we did and the things we fought for and the boys that died for it, it’s all gone down the drain.

“We haven’t got the country we had when I was raised, not at all.

“Nobody will have the fun I had.

“Nobody will have the opportunity I had.

“You just remember everything’s beautiful and live every day to the fullest. Just enjoy everything you possibly can,” he said about the secret to living to be 100.

"This is not the country we fought for!" pic.twitter.com/dA8zNPefPo