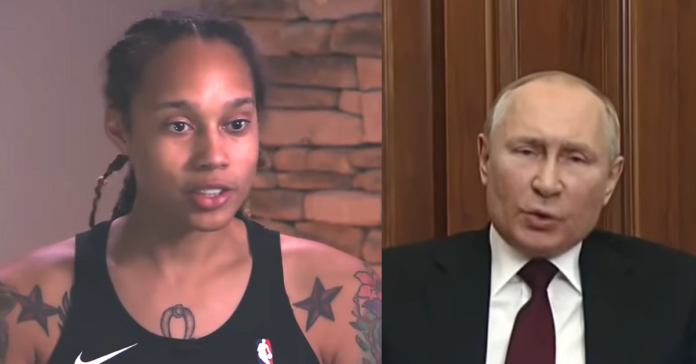 A woke WNBA star who trashed the National Anthem last June has been arrested in Russia and faces ten years in the gulag. Brittney Griner was arrested in Russia, she was playing for UMMC Ekaterinburg during the WNBA’s offseason, after customs officers found “vapes” containing hashish oil in her luggage as she tried to leave the country.

“If the league continues to want to play it, that’s fine. It will be all season long, I’ll not be out there. I feel like more are going to probably do the same thing. I can only speak for myself.

“I don’t mean that in any disrespect to our country. My dad was in Vietnam and a law officer for 30 years. I wanted to be a cop before basketball. I do have pride for my country.

“I personally don’t think it belongs in sports. Black people didn’t have rights at that point. It’s hard disrespecting a song that didn’t even represent all Americans when it was first made.”

“Two years ago #Woke Brittney Griner said we should stop blaring our national anthem. The Star-Spangled Banner before games. What’s ironic is that our government and @SenJohnHoeven  will fight like hell to get her back to the US.

“We know that there were some issues dealing with vape cartridges and other items but let me be very clear. Brittney Griner is a United States citizen, she was a guest in Russia and I will be demanding her release.

“Anyone that is killing and attacking and destroying Ukraine, a neighboring country that is not bothering them, has no right to hold Ms. Griner. Period.”

“We are aware of the situation with Brittney Griner in Russia and are in close contact with her, her legal representation in Russia, her family, her teams, and the WNBA and NBA.

“As this is an ongoing legal matter, we are not able to comment further on the specifics of her case but can confirm that as we work to get her home, her mental and physical health remain our primary concern.”

According to Fox News,

“Griner was in Russia playing for the women’s basketball team UMMC Ekaterinburg during the WNBA’s offseason.

“Playing overseas during the WNBA’s offseason is common among WNBA players who have the opportunity to earn lucrative contracts that oftentimes exceed what they earn in the United States.”

Two years ago #Woke Brittney Griner said we should stop blaring our national anthem, “The Star-Spangled Banner” before games.

What’s ironic is that our government and @SenJohnHoeven will fight like hell to get her back to the US. https://t.co/qgspmNJ0bM