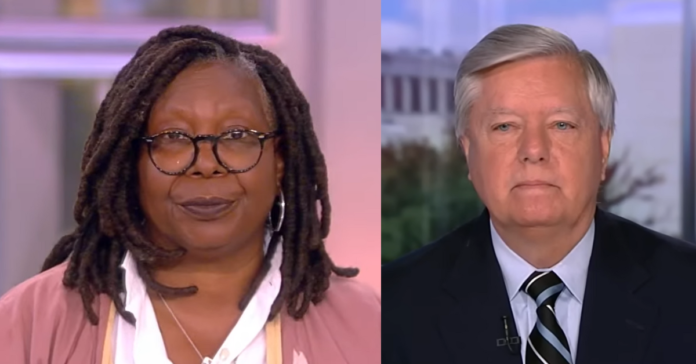 Whoopi Goldberg threatened to quit The View after her joke about Lindsey Graham backfired. White House spokeswoman Karine Jean-Pierre was on the show and said:

“We have Lindsey Graham, Senator Graham and other and other leaders of the Republican Party who are saying, and they’re being very clear about this, folks, we got to listen to them that they want a national ban on abortions.

Goldberg insinuated Graham is gay with her joke saying:

“Well, maybe he’s getting married. Do it quick, ’cause I know people are fooling around with our marriage rights, whoever, wherever you stand.”

After the commercial break Whoopi said:

“Before I do this introduction, I need to make clear that I was doing what I do as a comic, sometimes I make jokes and it was a joke.

“Nothing more than that.

“I just got a whole conversation about people misunderstanding the joke,” she said with a look on her face that meant she got chewed out by the producers.

Goldberg was suspended for two weeks earlier after she said the Holocaust “isn’t about race.”

“On today’s show, I said the Holocaust ‘is not about race, but about man’s inhumanity to man’. I should have said it is about both.

“As Jonathan Greenblatt from the Anti-Defamation League shared, ‘The Holocaust was about the Nazi’s systematic annihilation of the Jewish people – who they deemed to be an inferior race.’

I have no idea why she had to scale back on a suggestive subtle joke that half the country has already been speculating about anyway concerning Ms. Graham lol. You're fine Whoopi! @WhoopiGoldberg #TheView https://t.co/3vzmuLAiGx

Nikki Haley Shuts Down Co-Host of The View: “What’s sad is the left’s hypocrisy towards conservative minorities, by the way, last I checked Sunny...