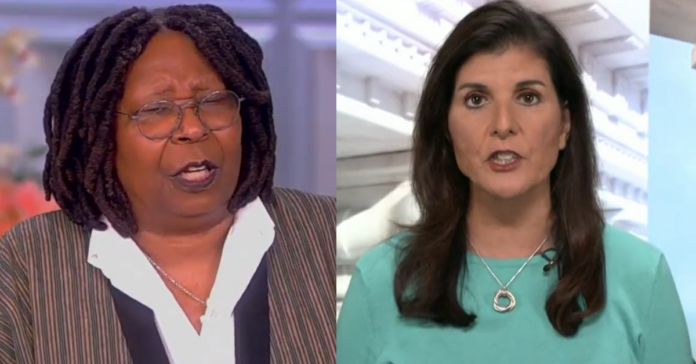 Whoopi Goldberg fired back at former Ambassador to the United Nations Nikki Haley who claimed Vladimir Putin’s brutal invasion of Ukraine “never would have happened” if Trump was still in office.

Goldberg was not happy with Haley and fired back by insulting both Haley and Trump on The View today. She said: “That woman who used to run the UN, she said this would not be happening if Bonehead had been president. And I say what I said last time, there wouldn’t have been any issue because that guy would have handed Ukraine over to the Russians.”

Haley said: “Stop reacting and start leading. First of all, work with Ukraine on real-time intelligence so that we can tell them everything that’s happening that they can’t see. Make sure that we send anti-tank, anti-air missiles immediately.

“Make sure that we are telling Poland and NATO that they’ve got to supply these planes to Ukraine. They need them right away so they can cover their own airspace. We’ve got to make sure we sanction these energy companies, all of them.

“We’ve got to make sure that we pull them out of the international banking system, and we need to stop taking any Russian oil. The idea that we would give our money to an enemy is unthinkable, and it’s absolute lunacy. We can’t allow this to continue.

“This never would have happened under Trump. What we have to look at now is how do we make sure it doesn’t go further under Biden.

“Time after time we’ve shown nothing but weakness.

“We have to show strength.

“You can talk about past presidents all you want, but the last thing you need to be doing is looking for the TV remote when your house is burning down.

“We’ve got to start dealing with the situation at hand.

“It’s common sense. I dealt with them at the United Nations. You never negotiate, you never deal with your enemies.

“You can’t trust them. That’s why I was mortified that Biden went so far as asking China for help with Russia.

“You never ask an enemy for help with another enemy.

“I never told China anything that I didn’t want Russia to know, because you know how they coordinate.

“It’s the same reason why it’s unthinkable that Biden would be coordinating or even thinking of getting back into the Iran deal with the Russians and Chinese at the table.

“Why are we negotiating and trusting enemies?

“You don’t do that. That’s the first start to being strong in America is understanding who your enemies are and make sure you let them know that you understand them,” she said.

"That woman who used to run the UN, she said this would not be happening if Bonehead had been president, and I say what I said last time, there wouldn't have been any issue because that guy would have handed Ukraine over to the Russians."

Outstanding interview by former US Ambassador to the United Nations @NikkiHaley https://t.co/KOqnQy81QW