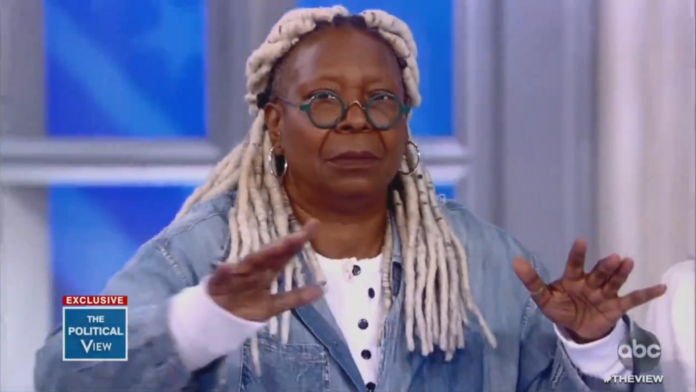 “What is he talking about? I’m in a depression now, because of him. Every time I see him, he depresses me. Everything he says is pissing me off and depressing me,” Goldberg said of President Trump as she melted down on The View.

She played a clip of Trump ripping Biden where POTUS said:

“If you vote for Biden, he will surrender your jobs to China. He will surrender your future to the virus. He’s going to lock down, he’s gonna want us to lock down. He’ll listen to the scientists. If I listened totally to the scientists, we would, right now, have a country that would be in a massive depression, instead of, well, like a rocketship.”

“That’s ridiculous, but we’re about two weeks away from this election.”

“Is this a winning strategy, Sunny? You think he’s making sense to folks, particularly people who may have lost loved ones over this?” Whoopi asked.

Co-host Sunny Hostin chimed in and said she was “disgusted” by Trump.

“I’m just shocked to hear him say that. When you hear something like this coming from the president, who, in my view, is responsible for the deaths of over 200,000 Americans, now saying that he doesn’t listen to scientists and that he hasn’t listened to scientists,” Hostin said.

“It’s just remarkable because had he listened to scientists, he would have saved hundreds of thousands of lives.”

“He’s just so reckless and cavalier about it. I’m actually disgusted this morning to hear that. I’m disgusted.”

‘Everything He Says Is Pissing Me Off’: Whoopi Goldberg Says She’s ‘In A Depression’ Because Of Trump https://t.co/gc9nJfrXMb