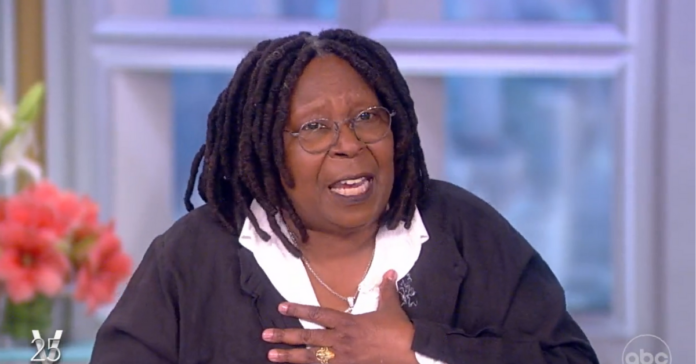 Whoopi Goldberg had a total meltdown today on ABC’s The View after a leaked document from the Supreme Court spelled the end of Roe v Wade. The Dems, despite controlling all of DC, immediately and loudly complained about the impending decision.

They don’t know the history of the ruling and many didn’t even bother to read the full opinion before they said the sky was falling and played the victim, which is about all they can do these days.

Whoopi Goldberg said: “This is not the first time, but I will tell you this is my body, and nobody — you know, you got people telling me that I have to wear a mask or don’t wear a mask or do this, everybody wants to tell me what to do — but you won’t let me make my decision about my body.

“You are not the person to make that decision. My doctor, myself, my child, that’s who makes the decision.

“Women in this country lived forever with it being illegal, okay? Women, when they decide something is not right for them, they’re going to take it into their own hands.

“We got tired of tripping over women in bathrooms, public bathrooms, who were giving themselves abortions because there was nowhere safe, nowhere clean, nowhere to go.

"If you don't have the wherewithal to understand that … then you're not looking out for me as a human being … and that is not okay." pic.twitter.com/u1DPPSp0Zm

“This law came about because people wanted people to have somewhere safe and somewhere clean. It has not to do with your religion.

“This is not a religious issue, this is a human issue. If you care about me as a human being, you should know three things.

“It is a hard, awful decision that people make.

“And if you don’t have the wherewithal to understand that, to start this conversation with, ‘I know how hard this must be for you.’

“If you’re starting it by telling me I’m going to burn in hell, you’re not looking out for me as a human being, whether I subscribe to your religion or not, and that is not ok.”

The set of ABC’s “The View” turned to chaos as the co-hosts lost it over a leaked Supreme Court opinion that dooms Roe v. Wade removing federal protections for abortions and sending the issue to the states.

She said: “It sounds to me that all of them felt that there was precedence set and that they would honor the precedent. And now it’s the complete opposite is happening, not that I’m surprised.