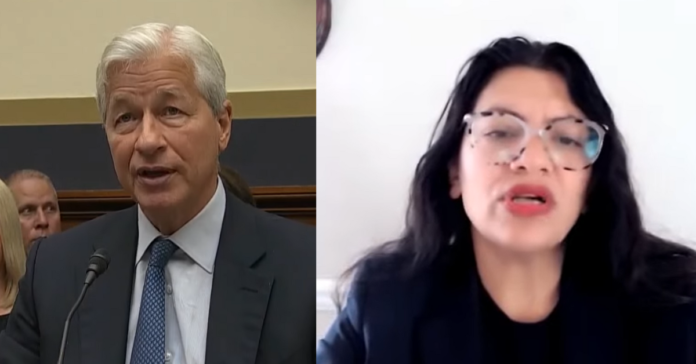 “You have all committed, as you all know, to transition the emissions from lending and investment activities to align with pathways to net-zero in 2050. So no new fossil fuel production, starting today, so that’s like zero.

“I would like to ask all of you and go down the list, cause again, you all have agreed to doing this. Please answer with a simple yes or no, does your bank have a policy against funding new oil and gas products, Mr. Diamond?”

Rep. @RashidaTlaib challenges bank CEOs to agree to stop funding fossil fuels, is rejected by every single one

Jamie Dimon: "That would be the road to Hell for America" pic.twitter.com/U7yr6AbtyF

“Absolutely not, and that would be the road to hell for America.”

Tlaib was not happy with the rebuke and said:

“Sir, you know what, everybody that got relief from student loans that has a bank account with your bank should probably take out their account and close their account.

“The fact that you’re not even there to help relieve many of the folks that are in debt, extreme debt because of student loan debt, and you’re out there criticizing it.

“We will continue to invest in and support clients who are investing in fossil fuels and in helping them transition to cleaner energies,” Jane Fraser, CEO of Citigroup said.

“We are helping our clients make a transition, and that means we’re lending to both oil and gas companies and to new energy companies and helping monitor their course towards the standards you’re talking about,” he said.

The former head of the Democratic National Committee harshly criticized a fellow Democratic congressperson on Wednesday, saying it was “shameful and dangerous” for Rep. Rashida Tlaib to say progressives shouldn’t back the government of Israel.

Driving the news: “The outrageous progressive litmus test on Israel by [Tlaib] is nothing short of antisemitic,” tweeted Rep. Debbie Wasserman Schultz.

A day earlier, Tlaib told an online conference that “[a]mong progressives, it has become clear that you cannot claim to hold progressive values, yet back Israel’s apartheid government.”

The seminar was held by Americans for Justice in Palestine Action and co-sponsored by American Muslims for Palestine.

It is a theme of the modern Left that they do things that fly in the face of reality, get clocked by reality, then get extremely angry that reality exists and blame their political opponents. https://t.co/A9VKKedeWu