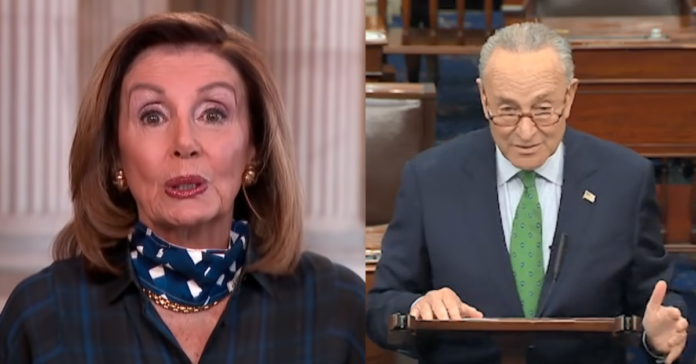 The final vote tally was 219-212. The two Democrats who broke from Pelosi’s iron grip and voted against the bill were Kurt Schrader of Oregon and Jared Golden of Maine. No Republicans voted for the bill where it faces an uncertain future in the Senate with the $15 per hour minimum wage provision attached. The Senate will strip it but the left-wing of the party will not be happy and will have to vote on it without that provision before it becomes law.

Golden said he voted against the bill because he “won’t support trillions more in funding that is poorly targeted or in many cases not necessary at this moment in time.” He also said he was concerned with the “compounding effect of the spending decisions of the past year.”

“As a matter of practice, I don’t get involved in the rules of the United States Senate,” Pelosi said before complicating passage of her own bill – “But as a matter of values, I can just say, we will not rest until we pass the $15 minimum wage. If it doesn’t prevail because of Senate rules we will persist. But we will not stop until we very soon pass the $15 minimum wage.”

“This is a once-in-a-century health and economic crisis,” Chuck Schumer said. “But Republican leaders are reportedly ‘maneuvering’ to get every single Republican member to oppose urgent, bold COVID relief.”

“Make no mistake,” he added, “We will deliver the American Rescue Plan with overwhelming public support.”

From CNBC: Democrats have thin majorities in both the House and the Senate and opted to try to pass Biden’s stimulus plan through a process known as budget reconciliation. Reconciliation allows a party to pass a bill with a simple majority vote but limits what can be included in the bill to those items that have a significant impact on the federal deficit.

Though the House passed their bill with a $15 per hour federal minimum wage stipulation, the Senate parliamentarian decided on Thursday the pay hike cannot be included in any bill under reconciliation.

The parliamentarian’s ruling underscores the fragility of the bill’s make-up in the Senate, where even a single Democratic nay could doom Biden’s first landmark piece of legislation.

Party leadership will likely focus on middle-of-the-road Democrats, like Sen. Joe Manchin of West Virginia, who are more likely to balk at provisions they see as expensive or unnecessary.

Manchin cast doubt on the fate of additional stimulus checks as early as Jan. 8, prior to Biden’s inauguration.

Speaker Pelosi takes the chair at 2:04 am to announce the vote, as the House approves a $1.9 trillion COVID relief package. pic.twitter.com/Z9YSnhfa5L

Pelosi delivers – the House passed Biden's $1.9 trillion Covid relief package 219-212. Two Democrats broke ranks and voted against the bill: Kurt Schrader of Oregon and Jared Golden of Maine. No Republicans voted for it. Now goes to the Senate.https://t.co/e0In1ginsr