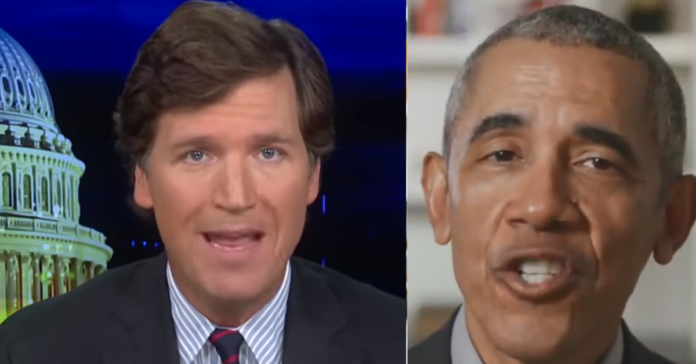 “Imagine if some greasy politician showed up at your loved one’s funeral and started throwing around stupid partisan talking points about Senate procedure. Can you imagine that?” Tucker Carlson said in response to Barack Obama’s comment about the filibuster at John Lewis’ funeral:

“Once we pass the John Lewis Voting Rights Act, we should keep marching,” Obama said. “And if all this takes eliminating the filibuster, another Jim Crow relic, in order to secure the God-given rights of every American, then that’s what we should do.”

Tucker was just getting warmed up and dropped the hammer on Barack and what most would agree will be a failed legacy: “Barack Obama, one of the sleaziest and most dishonest figures in the history of American politics, used George Floyd’s death at a funeral to attack the police,” Tucker said.

Carlson, who also described the former president as “a greasy politician” for calling on Congress to pass a new Voting Rights Act and to eliminate the filibuster, which Obama described as a relic of the Jim Crow era that disenfranchised Black Americans, in order to do so.

“Barack Obama, one of the sleaziest and most dishonest figures in the history of American politics, used George Floyd’s death at a funeral to attack the police,” Carlson said before showing a segment of Obama’s remarks.

Obama gave lengthy remarks about Lewis at Thursday’s funeral, but the part that got the most attention was his vehement push for Congress to pass a new Voting Rights Act, which was an issue that Lewis had pursued. The Supreme Court in 2013 struck down the heart of the 1965 law, allowing nine states, mostly in the South, to change their voting laws without federal approval.

“Bull Connor may be gone. But today we witness with our own eyes police officers kneeling on the necks of Black Americans.

George Wallace may be gone. But we can witness our federal government sending agents to use tear gas and batons against peaceful demonstrators,” Obama said.

Conner was the commissioner of public safety in Birmingham, Ala., and in the 1960s directed the use of fire hoses and attack dogs on people demonstrating for civil rights.

He’s since become a symbol of that era’s most racist leaders.

Carlson cut off the clip at that point with his own commentary, decrying Obama for comparing today’s police officers to such a noxious historic figure.

“Bull Connor?” Carlson stated. “The country falling apart, riven by racial strife and tribalism, and one of the most respected people in the whole country decides to pour gasoline on that and compare the police to Bull Connor?

As if America or Minneapolis is like Birmingham, Ala., in 1963? It’s insane. It’s reckless.”

“Of course, Obama doesn’t care. It’s only about November and the coming election,” Carlson said.

Gotta love it…
Tucker Carlson: “Barack Obama, one of the sleaziest and most dishonest figures in the history of American politics, used George Floyd’s death at a funeral to attack the police…” pic.twitter.com/kCrngucFex