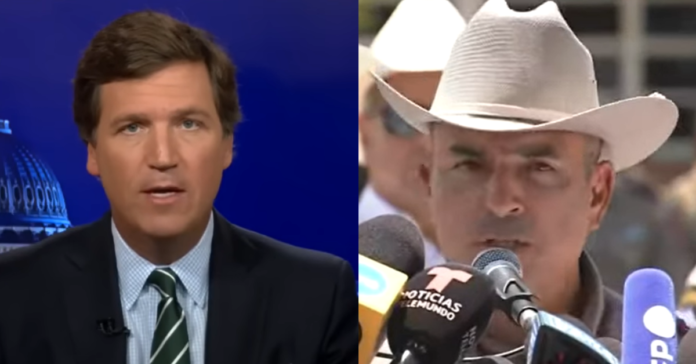 Fox News host Tucker Carlson demanded answers from authorities about the tragic Texas school shooting. Tucker said he is a strong supporter of the police but he has questions that need answers.

He said: “No matter how pro law-enforcement you are, we are, there’s only so much B.S. you can take in the face of a tragedy like this. So two days after this massacre, authorities are slowly admitting that everything they told us was untrue. So the second the shooting starts anywhere at any time, things get very confusing.

“They used to call it the fog of war, it’s entirely real. It’s hard to figure out exactly what happened when people start getting killed. But in the big questions, it’s very obvious immediately.

“It didn’t happen, but they said it did happen. That’s a lie. Why did they lie?

‘So the point is not to point fingers or blame people.

“Nobody wants a school shooting, everyone’s heart is broken by it.

“But the authorities are not allowed to lie to us in the aftermath of an event like this.

“Our federal officials are not allowed to take an event like this, ignore the facts, and then use it to take our constitutional rights away.

“Within hours of Tuesday’s massacre, Democrats in Congress announced they planned to clamp down on your ability to defend yourself with a firearm.

“Why is that? Apparently, the Uvalde shooting was your fault, so you are going to pay the price.

“In all there was a 16 minute gap until the police showed up and responded.

“So why did that take so long?

Uvalde Massacre: we need to know exactly what happened. pic.twitter.com/MqGV44aoLs

“That is a fair question. In fact it’s a critical question.

“Even at the Parkland school shooting, when police staged outside and students were being murdered, police wound up inside the building 11 minutes after the shooter.

“Why was that? We have a right to know.

“You have an 18 year old with a firearm and little kids being killed.

“What kind of specialty of equipment do you need?

“Negotiators? Really? As children are being murdered?

“It seems apparent that when that video was shot, the gunmen was still alive with the firearm in the school with children in the school.

“A Texas official later suggested on camera that while all of this was happening, some members of law enforcement in Texas went into the school to get their own children out.

“Is that true? If it is true it’s a moral crime at the very least.

“This mother was cuffed, freed, ran into the school and still had time to get her kids out as the police stood outside.

“The children who were murdered deserve at least that,” he said.