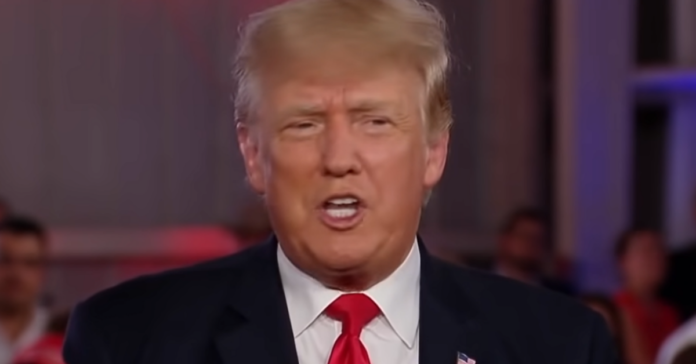 Former President Donald Trump is ready to throw his hat in the ring and mount another campaign for the presidency in 2024 according to a new report by Rolling Stone. A former senior official at the Republican National Committee told the magazine that Trump has told at least three people he’s eaten dinner with that he plans to run in 2024.

“I have three friends who’ve had dinner with him in the last couple of months,” the former RNC official said. “All three reported that his current plans are to run for president in 2024.”

“Now, whether he does or not is a different issue,” the official added. “We’ve still got three years to go. But he’s telling people that.”

“The ex-R.N.C. official says the first two dinners took place in late spring. But the third dinner happened in the last two weeks. The first two dinner companions came away from their conversations convinced Trump was serious and he’s running, the official adds.

“The third said he left the dinner ‘not 100% sure Trump wants to run but he likes being in the conversation, he wants to freeze the field, and he wants his name out there.”

“All the people I talk to who deal with him directly think as of now he is running,” one ex-Trump adviser added.

Trump has so far played coy about whether he intends to run again in 2024. At a recent Fox News town hall, host (and shadow Trump adviser) Sean Hannity raised the subject of the former president’s political plans for the next three years.

“You’re not going to answer, but I have to ask,” Hannity said. “Without giving the answer…have you made up your mind?”

“I think you got it right,” Hannity said to the crowd.

Last month, Trump returned to the political arena when he spoke at the annual convention for the North Carolina Republican Party.

A few weeks later, he held his first rally since January 6th in northern Ohio, where he gave his support to Max Miller, a Republican challenger to Rep. Anthony Gonzalez, who voted to impeach Trump for inciting the violent insurrection on January 6th.

Another indication of Trump’s interest in running in 2024 is the campaign cash he’s stockpiled. Save America, a pro-Trump political action committee, ended last year with $31 million in cash on hand, according to federal election records.

But money poured into the leadership PAC in the first three months of this year, and CNBC reported that the PAC ended March with $85 million on hand. (The PAC’s 2021 finance disclosures aren’t due until later this summer.)

By comparison, Trump had just $8.4 million on hand at the end of March 2017, according to the Center for Responsive Politics.