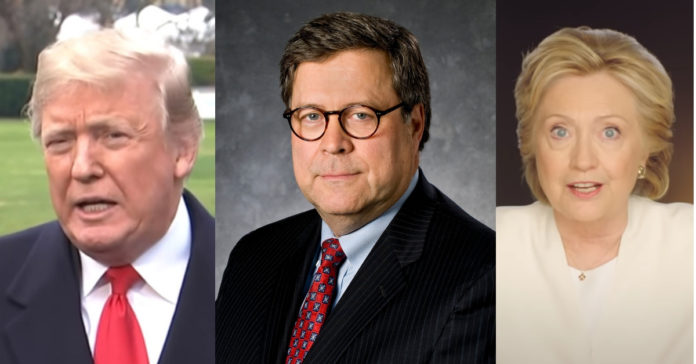 The bad news keeps coming for Hillary Clinton and she is running out of places to hide. A federal judge stunned the world and reopened Hillary’s email case yesterday.

It was narrow in scope, the judges ruling, but potentially explosive because Tom Fitton, the man investigating via FOIA, believes he can find intent and a crime in her attempts to dodge the law.

Which would sink her like a stone. Adding insult to injury, Trump’s new pick for Attorney General,  William P. Barr, also thinks Hillary Clinton should be investigated for various offenses.

From The Daily Beast: Barr has said publicly that the DOJ should have done more to investigate Hillary Clinton, telling The New York Times in November 2017 that there was nothing “inherently wrong” about the president calling for an investigation into Clinton.

“Although an investigation shouldn’t be launched just because a president wants it, the ultimate question is whether the matter warrants investigation,” Barr said, adding that there was a basis to investigate Clinton for Uranium One.

“To the extent it is not pursuing these matters, the department is abdicating its responsibility,” he said.

“I don’t think all this stuff about throwing [Clinton] in jail or jumping to the conclusion that she should be prosecuted is appropriate,” Barr told The Washington Post last year, “but I do think that there are things that should be investigated that haven’t been investigated.”

Barr also defended then-FBI Director James Comey’s decision to reveal to Congress just days before the 2016 election that the FBI had re-opened its investigation into Hillary Clinton’s email use. Deputy Attorney General Rod Rosenstein criticized the decision, which the Clinton team blamed in part for her defeat.

Sen. Lindsey Graham (R-SC), poised to chair the Senate Judiciary Committee in the next Congress, told The Daily Beast that Barr would be easy to confirm.

“I think he’d be an outstanding choice and is highly capable and highly respected, and should be easily confirmable. I think he’d be a good leader for the DOJ and someone President Trump could be proud of,” Graham said “However, I know the president has many good choices and I will do everything I can to support his nominee if I’m chairman of the Judiciary Committee. And the sooner we can start the process, the better.”

“I think the president really couldn’t do better,” he added.

Barr used to be Bob Mueller’s boss as well so they have an existing relationship that is rumored to be quite good.

This is important because the Democrats are going to complain about whoever Trump puts in there and it is not worth the headache.

There are plenty of good conservative lawyers with the requisite experience and Trump has his pick and it sure looks like he made a wise one.