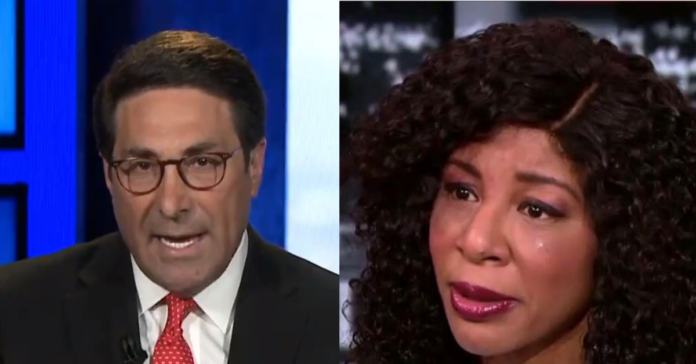 President Trump’s lawyers just took the extraordinary step and released a video that calls into question the honesty one of his accusers.

Alva Johnson, a former campaign staffer, sued him over an unwanted, and now her lawsuit is in trouble. Shockingly, her lawyers say the video proves their point and is not damaging to their case.

She needs new lawyers, but you can judge for yourself. The video is below…

From The New York Post: Lawyers for President Trump have released a video showing him kissing a former campaign staffer on the cheek — and arguing that it contradicts her claims that he forcibly kissed her on the mouth.

The 15-second clip shows the then-presidential candidate interacting with staffer Alva Johnson on a crowded RV in August 2016 and was filed in response to Johnson’s lawsuit.

Johnson, wearing a white Trump hat, can be heard telling him that she’s been “away from my family for eight months for you.”

Trump then grabs her by the shoulders and kisses her right cheek, as she says, “We’re going to get you in the White House. I’ll see you in February.”

In a motion filed Wednesday in Florida federal court, Trump’s legal team argued that the video proves that Johnson and her lawyer have “lied repeatedly” about the brief interaction.

Johnson, a mom of four from Alabama, claimed Trump “forcibly” planted a kiss on her mouth and grabbed her hand without letting go.

“The two have a very brief, innocent interaction that is mutual — and not forcible,” Trump lawyers said in court papers.

“If Plaintiff had been attacked, as she alleges, one would expect a far different response than telling him she’ll help him get elected President of the United States,” they continued. “That is the response of a person who is moved in a positive way by her candidate’s show of appreciation and recognition of her dedicated service to his campaign.”

The video was taken by Brian Hayes, a campaign volunteer who was in the RV at the time and made the recording on his phone, according to court papers.