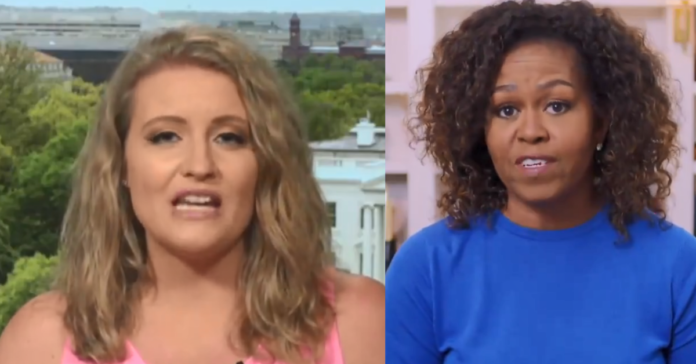 “Not just because of the quarantine, but because of the racial strife, and just seeing this administration, watching the hypocrisy of it, day in and day out, is dispiriting. I don’t think I’m unusual, in that. But I’d be remiss to say that part of this depression is also a result of what we’re seeing in terms of the protests, the continued racial unrest that has plagued this country since its birth. I have to say that waking up to the news, waking up to how this administration has or has not responded, waking up to yet another story of a Black man or a Black person somehow being dehumanized, or hurt or killed, or falsely accused of something, it is exhausting.’

“So I would encourage Michelle Obama to go to church and to find meaning in the Lord Jesus Christ as her own personal savior.”

Democratic Party leader A. Scott Bolden defended Michelle to the incredulous Ellis during the interview. This is their exchange:

“30 percent plus, according to the census bureau, all of us are feeling some form of anxiety or depression, low-level — she didn’t say clinical — because of this pandemic, the lack of leadership, and the numbers keep going up,” he continued.

“Of the racial strife that this president will not address to bring this country together, and the economy.”

Ellis responded, “I’d really like to know what Scott is referring to when he’s talking about this president with all of the coronavirus response, it’s been absolutely excellent, and when you’re talking about his ability to serve the Black community, are you talking about the First Step Act?

Are you talking about the fact that he is so pro-life and has reduced as much as possible Planned Parenthood?”

“Also, I think that this is more of an issue of Michelle Obama’s liberalism, because the Family Institute for Studies has shown that actually conservatives tend to be more joyful and more happy overall with their lives because we still believe in the pillars of society, which is the church and the family,” she declared.

“So I would encourage Michelle Obama to go to church and to find meaning in the Lord Jesus Christ as her own personal savior.”

Conservatives tend to be more joyful overall because we still believe in the pillars of society, including the church and the family.

“I would encourage @MichelleObama to go to church and find joy and meaning in the Lord Jesus Christ as her own personal Savior.” pic.twitter.com/7GCWnkrgbX