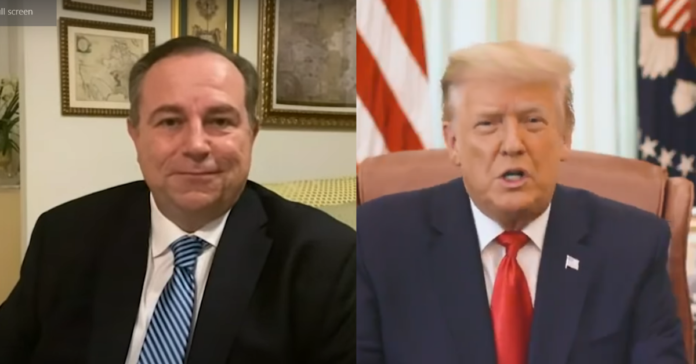 Christopher Ruddy is a close personal friend of Donald Trump’s. He has been for a long time, a lot longer than Trump has been in politics.

Ruddy is also the CEO of the upstart network keeping Rupert Murdoch up at night, Newsmax. Ruddy, at many crisis moments during Trump’s presidency, offered wise independent counsel to Trump.

That he did it publicly and sometimes on Fox or CNN without Trump going after him speaks to their close relationship. During an interview with Greg Kelly, Ruddy broke his silence and hinted at Trump’s future.

“I see him staying very active, politically being a great political and media force.”

“He can really go all over the world.”

Ruddy said Trump has yet to get the proper credit here for the Mid East peace agreements but that is not the case in many other countries.

“He could be a valuable resource to the United States as a peacemaker around the world,” Ruddy said.

“I certainly would support him running again in 2024, I’m not sure he’s gonna be quick to pull the switch on that,” Ruddy added.

“You know one of those things I think he’s gonna realize when you’re post-president you got a lot of the perks of being president, you have the access to the media stage, not only in the U.S., but around the whole world, and he’s gonna have no restrictions.”

“I mean every time he said boo someone in Congress was opening an investigation against this guy,” he said.