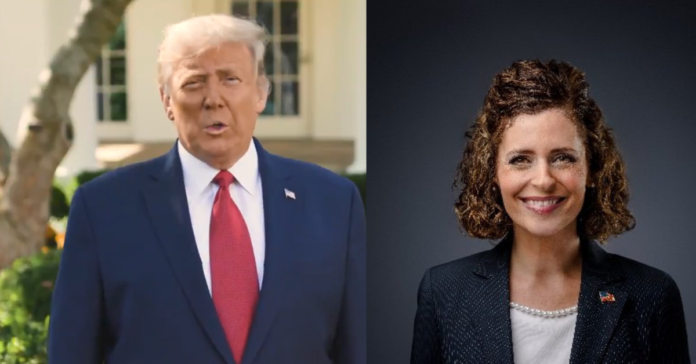 Julia Letlow won a special election in a landslide Saturday. She will succeed her husband Luke who died before he could be sworn in after winning his November election.

She was Trump’s first big endorsement after leaving the White House and while she was favored he helped her clear a crowded field. Trump won 64% of the district in November.

Letlow is the first Republican woman elected from Louisiana to the House. She got 65% of the vote. Along with Trump’s endorsement, she was endorsed by minority leader Kevin McCarthy of California and House minority whip Steve Scalise of Louisiana.

Letlow will take the seat that her late husband Luke, who won last year’s election but died in December after being diagnosed with Covid-19, was never able to hold.

She will make history as the first Republican woman to represent the state in Congress.

Letlow, a first-time candidate, will avoid a runoff because she secured a majority among the 12-person field.

As she campaigned, Julia Letlow emphasized the same issues as her husband — improving education; fixing roads, bridges and sewer systems through a massive federal infrastructure bill; making sure farmers receive the aid they need from the government; and expanding broadband internet service in rural areas.

Letlow noted that she has slow internet service at her home in Start, a small town in Richland Parish east of Monroe.

As she campaigned, Letlow also spoke openly about her Christian faith and emphasized to the conservative voters that she was anti-abortion and opposed efforts to restrict ownership of guns.

She said she would fight any plans to carve up her district when the Legislature meets later this year to redraw the congressional boundaries.

Luke Letlow had been well-positioned to run for the seat because he had spent six years as the right-hand man of U.S. Rep. Ralph Abraham, a Republican doctor who was elected to the seat in 2014, finished third in the 2019 governor’s race and then chose not to seek reelection to the House in 2020.

Julia Letlow got 58% of the early vote in Rapides Parish — this is where her late husband did the worst in December (his opponent was from there). That's about what she's getting overall. Seems on track to win outright #la05