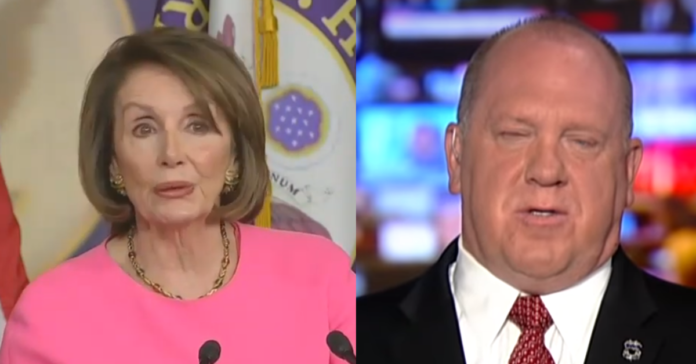 Thomas Homan was a high ranking member of Barack Obama’s government. In other words, he is no big conservative.

He ran ICE so he, not Nancy Pelosi, knows what is really going on down at the border. Look, he worked for Obama and now he is working for Trump so he is not a political operative, but rather an independent worker who puts America first.

And he just accessed Pelosi and the Dems of extortion over their new border bill. Strong words indeed.

From The Washington Examiner: Former President Barack Obama’s top immigration chief in charge of removing illegal immigrants said that the “cages” Democrats have accused President Trump of housing children in were the brainchild of the Obama administration.

“I’ve been to that facility, where they talk about cages. That facility was built under President Obama under (Homeland Security) Secretary Jeh Johnson. I was there because I was there when it was built,” said Thomas Homan, who was Obama’s executive associate director of Immigration and Customs Enforcement for nearly four years.

At an immigration conference today, Homan, under consideration for a new position of “border czar” in the Trump administration, grew visibly angry answering a question about “cages” often cited by Democratic critics of the president.

He cited one Democratic chairman who asked a Trump official, “You still keeping kids in cages?”

He said that the Border Patrol facilities where all illegals are initially kept “were not built to take care of children.” In fact, the recent surge of younger illegal immigrants is a new trend.

He said that there are no cages but chain-link fencing that separates kids from adults, done for safety. “It’s chain link dividers that keeps children separate from unrelated adults. It’s about protecting children,” he said.

And he said that the humanitarian aid bill working through Congress would help, but he said the House version amounts to “extortion” because it cuts funding for enforcement.

Maxine Waters Puts Biden On Notice In Bad Sign For Dems: “It is unconscionable, I meant it was bad, and it shocked me”