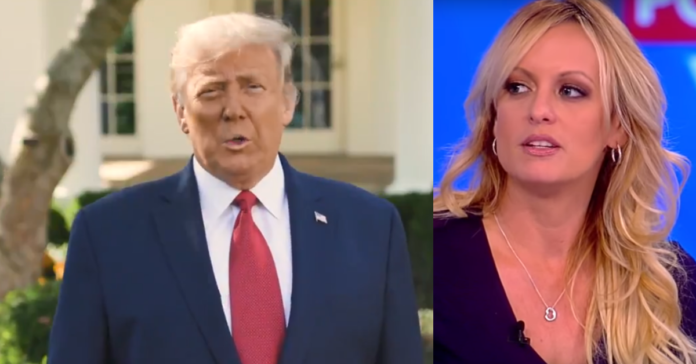 Former President Trump got some good news today when a new report said that a potential criminal case against him is ‘dead.’ Trump was named as ‘individual 1’ in Michael Cohen’s criminal case and many were expecting Trump to get charged with a campaign finance charge after he left office for having Cohen pay Stormy Daniels.

But that was always wishful thinking as the case was a loser to start – just based on what happened to former Dem presidential candidate John Edwards. Edwards faced charges for a similar payoff to protect his political future but he said he was trying to hide the payment from his wife, not the public.

That would have been Trump’s legal reasoning for Cohen to pay Stormy so the feds were never going to bring such a weak case against a former president. And now we know they will not no matter what the hysterical left wants.

The federal probe of hush money paid to cover up former President Donald Trump’s alleged extramarital affairs hasn’t been restarted, even though he no longer has the legal shield of the presidency, The Associated Press has learned.

Trump’s exit from the White House last month prompted speculation that U.S prosecutors might revive the investigation that sent his former attorney, Michael Cohen, to prison. Trump himself had been publicly implicated by prosecutors as complicit in Cohen’s campaign finance crimes during his 2016 run for office.

But several people involved in the case say the U.S. attorney’s office in Manhattan has made no such move, and is unlikely to do so going forward.

An attorney for one key witness described the investigation as “dead,” adding prosecutors have even returned certain evidence they collected — a likely indication no one else will be charged. The attorney spoke on the condition of anonymity because prosecutors have not discussed the case publicly.

Trump’s departure from office has not altered that equation, said the officials, who weren’t authorized to discuss internal deliberations and spoke on the condition of anonymity.

Cohen, who has cast himself as a potential star witness against his former boss, told the AP that he has not heard from the U.S. attorney’s office in Manhattan since late 2018, when he was sentenced to three years in prison for arranging the payments.

The U.S. attorney’s office declined to comment. A message seeking comment was sent to Trump’s attorney; his legal team is preparing for the start of his second impeachment trial.

Trump is NOT expected to face charges for paying hush money to Stormy Daniels and Karen McDougal https://t.co/o9ec9fmDM0