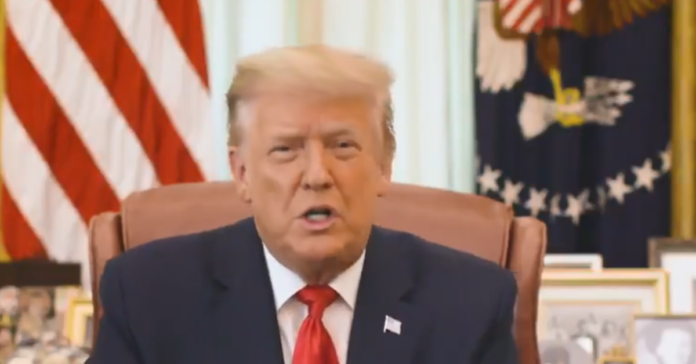 Former President Trump will make his first big political speech since leaving office and will give the keynote address to a critical Republican National Committee gathering tonight in Florida. The event will be held at Mar-a-Lago.

Fox News saw an advance copy of Trump’s prepared remarks and are reporting he will lay out a plan to big GOP donors on how to take back the White House and Congress during the next two elections.

Trump will tell the donors that if Republicans stick to an “America First” agenda, one that proved so popular across all demographic groups over the last four years, the GOP will win back Congress in 2022 and take back the White House in 2024.

Trump will also take a few swipes at Joe and Kamala and will highlight other issues facing the country like cancel culture, proposed gun restrictions, and the record-breaking surge of migrants attempting to cross the southern border.

“Saturday’s speech will be welcomed words to the Republican donors visiting Mar-a-Lago to hear directly from President Trump.

“I stand before you this evening filled with confidence that in 2022, we are going to take back the House and we are going to reclaim the Senate–and then in 2024, a Republican candidate is going to win the White House,” Trump will say according to Fox.

“Illegal Border crossings are now higher than at any point since 2006,” Trump says. “On this issue alone, we can win the House, the Senate, and the White House.

“It is one of the greatest self-inflicted disasters anywhere in the world.

“By putting radical open borders liberal Kamala Harris in charge of border security, Joe Biden sent a resounding message to every migrant on earth that America’s borders are now wide open for trespassing,” Trump will say.

“These are all donors in the hundreds of thousands level” said the source, who is familiar with the event’s planning.

The party dropped more than $100,000 on the banquet, the Washington Post reported.

Florida Gov. Ron DeSantis will deliver remarks during a cocktail hour, followed by RNC chairwoman Ronna McDaniel. Trump, who has been living at his Florida resort since leaving the White House in January, will take the podium around 7 pm.

“The GOP is Trump’s party, so ‘all Republican roads lead to Mar-a-Lago’” https://t.co/Y49VVja3Cp