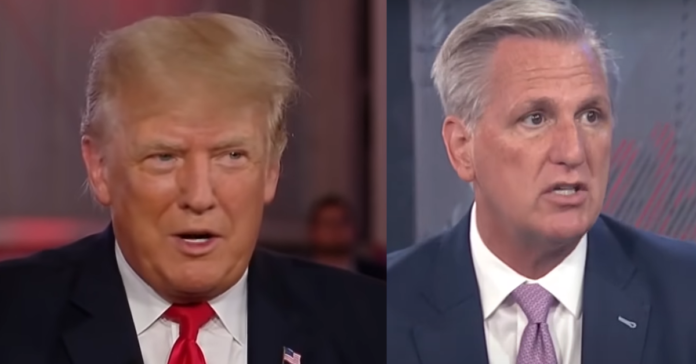 Washington Post associate editor Bob Woodward has a new book about Trump and his administration and CNN got an early copy. The book is called Peril and co-authored by Robert Costa. It comes out next week. Today, a few excerpts were published causing a firestorm across the political divide.

In one instance General Milley can be seen taking top-secret action in case Trump went ‘rogue’ while in another scene Nancy Pelosi is calling Trump crazy and fat and demanding Milley take action.

But it is Kevin McCarthy who should be most worried about the book because Trump, always a keen judge of character, sees right through him.

“This guy called me every single day, pretended to be my best friend, and then, he f*cked me. He’s not a good guy,” Trump said, according to the book.

“Kevin came down to kiss my ass and wants my help to win the House back,” Trump said, according to Woodward.

The book quotes Republican Sen. Lindsey Graham saying of Trump running in 2024: “If he wants to run, then he’s going to have to deal with his personality problems we’ve got a very damaged team captain.”

But the book claims when he was talking to Trump Lindsey sings a different tune:

“You’ve been written off as dead because of January the 6th. The conventional wisdom is that the Republican Party, under your leadership, has collapsed,” Graham told Trump, according to the book, before saying “if you came back to take the White House, it would be the biggest comeback in American history.”

Former President Trump on Tuesday said the United States’ top military officer was guilty of treason if he went behind his back and promised to warn China of an impending attack.

He was responding to bombshell revelations in a new book claiming that Gen. Mark Milley, chairman of the Joint Chiefs of Staff, twice called his Chinese counterpart last year over concerns that then President Trump was ready to go to war.

‘If it is actually true – which is hard to believe that he would have called China, and done these things and was willing to advise them of an attack or in advance of an attack – that’s treason,’ said Trump during an interview with Sean Spicer on Newsmax TV.

Excerpts from ‘Peril,’ by journalists Bob Woodward and Robert Costa, were published on Tuesday suggesting Milley feared Trump would launch a war in the wake of November’s election defeat to Joe Biden.

Milley sought to assure Gen. Li Zuocheng of the People’s Liberation Army that the U.S. was not about to launch strikes in the calls.

In one call he said he would use backchannels to alert his counterpart if an attack were imminent.

The deadlines triggered a wave of condemnation from Republicans who demanded Milley’s resignation and accusations of treason.

An angry Trump dismissed the claims and said Milley was trying to distract from his own role in Afghanistan.

‘I think he’s trying to just get out of his incompetent withdrawal out of Afghanistan, the worst, the dumbest thing that anybody’s seen … probably the most embarrassing thing that’s ever happened to our country,’ he said.

Trump has some harsh words for Kevin McCarthy in the book, even after their Mar-a-Lago meeting. “This guy called me every single day, pretended to be my best friend, and then, he fucked me. He’s not a good guy,” Trump is quoted as saying