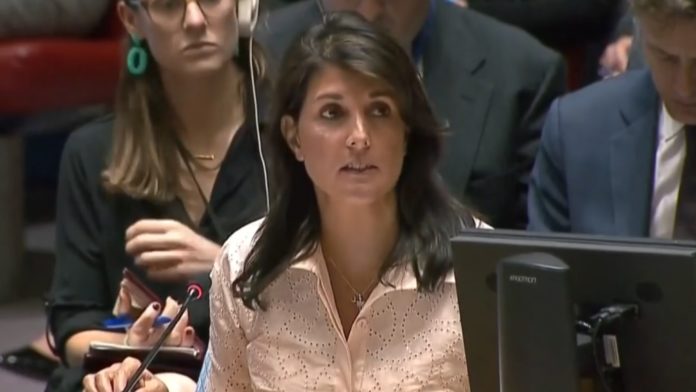 In a move sure to cause liberal outrage, Trump is following through on the rumors and will tap a former Fox and Friends host to replace Nikki Haley as UN Ambassador.

Heather Nauert will be named to replace Haley as early as tomorrow reports say. She is the current State Department spokeswoman and has more than earned the huge promotion.

She will need to be confirmed by the Senate and with all that is going on in the world, that will be the easy part.

Trump is changing the way the world does business and having a strong voice in this key position will be important.

Nikki Haley did a fine job promoting America and the administration but she did it with an independent voice Heather will need to find if she wants to excel at this position.

She will be dealing with some major initiatives soon – most importantly Trump’s Mideast peace plan that will be unveiled soon. Good luck.

From Bloomberg: Nauert, 48, is an unorthodox choice for the UN role given that she had little experience in government or foreign policy before joining the administration in April 2017 after several years as an anchor and correspondent for Fox News, including on the “Fox and Friends” show watched by Trump. Haley also didn’t have foreign policy experience when she took the UN posting, but she had twice been elected governor of South Carolina.

Nevertheless, Nauert has gained Secretary of State Michael Pompeo’s trust after being excluded from the inner circle of his predecessor, Rex Tillerson. She is also closely aligned with Trump’s daughter, Ivanka Trump, and her husband Jared Kushner.

If she wins Senate confirmation, Nauert will face a broad agenda at the UN topped by the need to maintain international sanctions on North Korea. Haley rallied global support for tougher measures in 2017, when Pyongyang ramped up its ballistic missile and weapons test, but there has been increasing pressure to ease up on the restrictions following Trump’s meeting with Kim Jong Un in June.