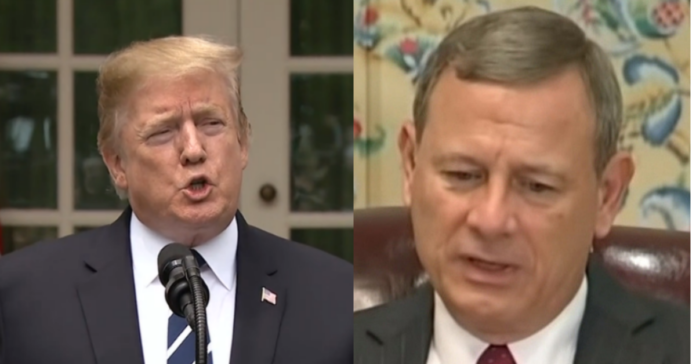 President Trump is expected to overrule the Supreme Court and will issue an executive order to put the citizenship question on the census.

Now, this will be a very controversial move with the odds of success at about 50-50. Here is the deal – the Supreme Court blocked Trump’s citizenship question in a tough 5-4 vote, but John Roberts clearly said the question itself was ok, the process the Trump admin used was not.

Basically, Wilbur Ross and Steve Bannon got cute and tried to use dubious methods to get the question on the census when Trump could have just said it’s on and that is that.

If he had done it that way, Roberts probably gives it the green light. So expect Trump to do that today and the left to sue.

Which will put the ball back in Roberts’ hands – he did say come back with a new rationale for the question so he will have to make a decision.

From Bloomberg: President Donald Trump will announce an executive action to continue his fight to include a citizenship question on the 2020 U.S. Census, the latest sign he may not be dissuaded after being rebuffed by the Supreme Court.

The people, who asked for anonymity because the plan wasn’t yet public, said details of the announcement were still fluid.

In a tweet previewing a Thursday social media summit at the White House, Trump said, “At its conclusion, we will all go to the beautiful Rose Garden for a News Conference on the Census and Citizenship.”

Trump “is pushing everyone in the White House and the Department of Justice to find all the various ways he can” move ahead with plans to ask people their citizenship status as part of next year’s questionnaire, U.S. Citizenship and Immigration Services acting Director Ken Cuccinelli said Wednesday.

A federal judge on Monday rejected a request by the Trump administration to assign a new legal team to a lawsuit that blocked the U.S. from adding the proposed citizenship question.

The White House will be hosting a very big and very important Social Media Summit today. Would I have become President without Social Media? Yes (probably)! At its conclusion, we will all go to the beautiful Rose Garden for a News Conference on the Census and Citizenship.