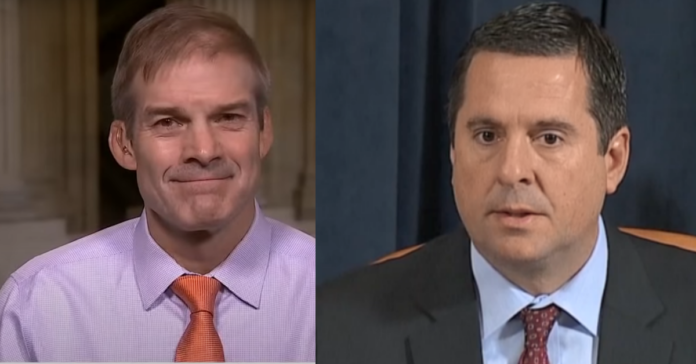 Nunes and Jordan are set to get the Presidential Medal of Freedom. The medal is a high honor given to individuals making an “especially meritorious contribution” to the nation.

The left will go absolutely bonkers when Trump makes this move you can be sure. Nunes exposed corruption at the FBI with the lies on Carter Page FISA warrant and was attacked for telling the truth for four years.

A White House official confirmed that Trump would present Nunes with the Presidential Medal of Freedom on Monday. The former chairman of the House Intelligence Committee has been an ardent backer of Trump’s during probes into Russian interference in the 2016 election and the president’s 2019 impeachment by the Democratic-led House.

The award, established by President John F. Kennedy, is meant to recognize those who have made an “especially meritorious contribution” to national security, world peace or “cultural or other significant public or private endeavors.”

The award comes as Trump has been rewarding supporters with the perks and prestige that come with serving on a host of federal advisory boards and commissions before he leaves office on Jan. 20.

Jordan, one of the GOP leaders in trying to undermine confidence in the results of the 2020 presidential election, is expected to receive the award next week. Trump’s intent to present the award to the lawmakers was first reported by The Washington Post.

Fewer than a dozen Presidential Medals of Freedom have been handed out per year in the past 20 years, with prior recipients including Nelson Mandela, Martin Luther King Jr., and President-elect Joe Biden. Trump has only given 19 since he took office in 2017, with the majority going to former professional athletes and coaches, as well as prominent conservatives like economist Art Laffer, Senator Orrin Hatch, and former Supreme Court Justice Antonin Scalia.

Nunes and Jordan, both Republicans, have been some of Trump’s most ardent allies in Congress over the past four years. While Nunes was chair of the House Intelligence Committee, he publicly cast doubt on the special counsel investigation into Trump and authored the infamous “Nunes memo,” which alleged FBI and Justice Department misconduct during the investigation, which Trump declassified in 2018. More recently, Nunes has taken to filing defamation lawsuits that have mostly been thrown out of court.

Jordan, a founder of the right-wing Freedom Caucus, took a leading role in defending Trump during impeachment hearings in 2019. Prior to entering Congress, Jordan was an assistant wrestling coach at Ohio State, where former wrestlers who worked with him have said he reportedly knew about sexual misconduct complaints against team doctor Richard Strauss and did not act on them.

Trump previously floated the idea of giving Nunes a medal, saying in a 2018 Fox News interview that he should get the Medal of Honor, a military honor, before later correcting himself.