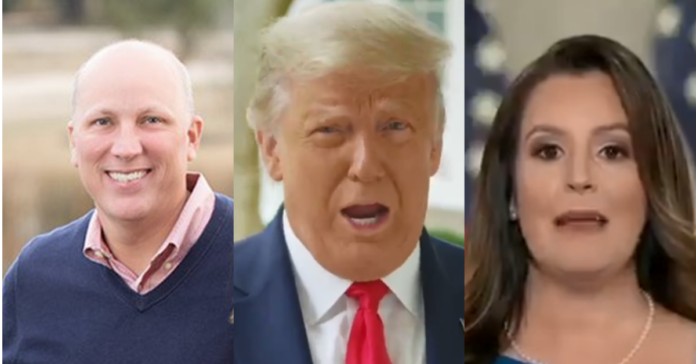 Conservative Rep. Chip Roy (R-Texas) just shook up the GOP and announced he will launch a last-minute challenge to Elise Stefanik for the coveted House Republican Conference chair post. Rep. Elise Stefanik (R-N.Y.) was running unopposed for the position after the GOP took a snap vote to remove Liz Cheney.

Stefanik has the endorsement of former President Trump and top House GOP leaders. Trump cleared the field for Stefanik and she was expected to breeze through the vote and claim the No. 3 leadership position. But not anymore. Now she will have to fight for the job.

Stefanik and Roy will address the voters, in this case the rank-and-file Republicans, during a candidate forum Thursday. The closed-door vote will happen Friday morning. Trump was furious with the move and issued a statement where he threatened to primary the Texas Rep.

Trump said: “Can’t imagine Republican House Members would go with Chip Roy—he has not done a great job, and will probably be successfully primaried in his own district.”

“I support Elise, by far, over Chip,” Trump added.

With Mr. Trump and House Republicans’ top two leaders backing Ms. Stefanik’s bid, it is unlikely that Mr. Roy’s candidacy could derail her ascension to the No. 3 post.

But it is a sign of the internal discord in the conference prompted by the decision among party leaders to depose Ms. Cheney for her repeated efforts to call out Mr. Trump’s repeated myth of a stolen election.

Mr. Roy had circulated a remarkable three-page broadside on Tuesday scrutinizing the voting record of Ms. Stefanik — who was named one of the most bipartisan members of Congress before morphing into a strident Trump ally — and arguing that top Republicans were racing to elevate a lawmaker who he said did not reflect “our conservative values.”

“We must avoid putting in charge Republicans who campaign as Republicans but then vote for and advance the Democrats’ agenda once sworn in,” Mr. Roy wrote.

Stefanik is up for the challenge – this is what she said before the GOP removed Cheney.

“Number one, I would listen to the voters across the country, which I do every day in my district, which voted overwhelmingly for President Trump,” Stefanik said.

“I would also spend the time listening to the members of the conference and making sure that we’re representing the majority of the Republican conference’s views, and when you’re not able to do that anymore, you should step down from those leadership positions,” Elise said taking a swipe at Cheney.

“You should realize that it’s not an opportunity for you to share your personal views, whatever they may be, that you speak for the team,” Stefanik added.

“I also would make sure that we’re not attacking our fellow members and attacking President Trump and Trump supporters.

“If you look at the November election, President Trump earned more votes than any other Republican nominee candidate for president in our nation’s history, and those voters, that coalition is going to be critical going into the next election.

“I know that voters across this country want people who can stand strong and fight on their behalf and speak with a clear message about what’s at stake,” she said.

Trump says Chip Roy "will probably be successfully primaried in his own district" pic.twitter.com/ECC1mXd2rW

Roy says he’ll address his colleagues at the candidate forum tonight, where he plans to raise concerns about how speedy this election process has been. https://t.co/VdxVBVAdeT