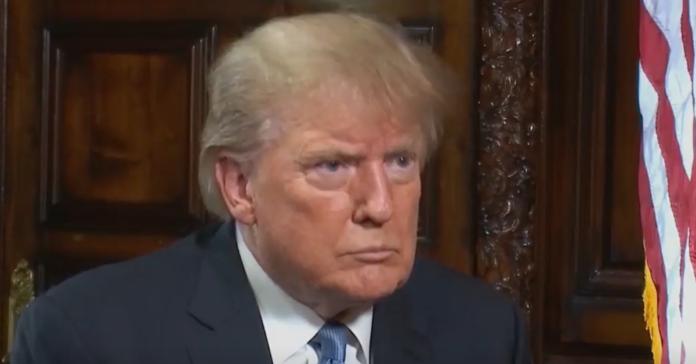 Former President Donald Trump gave an interview with OANN where he attacked gutless politicians who refuse to lead. Trump was speaking about politicians who won’t admit whether they have received the booster shot to protect against the virus.

Host Dan Ball asked Trump about his recent comments encouraging people to get vaccinated against the virus. “Now after so many months of the vaccine being administered and these side effects, and Americans’ questions sic of it, do you reconsider your push for it? Or what’s your view on the vaccine in general?” Ball asked.

Trump said: “Well, I’ve taken it. I’ve had the booster. Many politicians–I watched a couple of politicians be interviewed and one of the questions was, ‘Did you get the booster?’ – because they had the vaccine – and they’re answering like–in other words, the answer is ‘yes’ but they don’t want to say it.

“Because they’re gutless. You gotta say it – whether you had it or not. Say it.

“The fact is that I think the vaccines saved tens of millions throughout the world. I’ve had absolutely no side effects.”

Trump added that the vaccine protects the people who need it most from severe illness and death.

“If they get it, they’re not going to hospitals for the most part and dying,” Trump said. “Before it was a horror. and now they’re not.”

The media immediately speculated that Trump was talking about the only real rival he may face in 2024, Ron DeSantis.

Driving the news: While Trump did not specifically name anyone, some GOP politicians, including Florida Gov. Ron DeSantis, have dodged questions about their booster status.

DeSantis’ staff told Politico last week that they were not sure whether the governor had received a third vaccine shot because it was a “private medical” decision.

Interestingly, some of Trump’s staunchest allies in Congress have refused to say whether they’re vaccinated, let alone boosted. As of last summer, nearly half of House Republicans declined to disclose their vaccination status.

Additionally, Trump ally Gov. Ron DeSantis (R-FL) has refused to say whether he has received the booster shot. “I’ve done whatever I did,” he said in December when asked if he’d been boosted. “The normal shot.”

This would indicate Trump's "must tell the truth" message to me about the timing of his vaccine comments a few weeks ago were about DeSantis, who is increasingly under his skin https://t.co/0eTju9ka9p