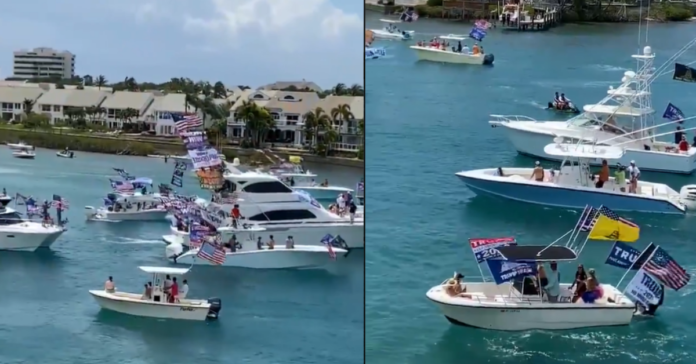 The pro-Trump boat parades that captivated a nation in the 2020 election are back.  A large number of Trump supporters took to their boats in Jupiter Florida today with at least one VIP guest in the crowd – Roger Stone.

Trump said about the parade, “Wow! I hear they have thousands and thousands of boats parading in Jupiter, despite the fact that they tried to cancel us. Everyone is having an incredible time. On this day, we especially appreciate everyone who served and fought for our great Country. I love you all!”

Trump said earlier about this special day, “On this Memorial Day, we remember the fallen heroes who took their last breaths in defense of our Nation, our families, our citizens, and our sacred freedoms. The depth of their devotion, the steel of their resolve, and the purity of their patriotism has no equal in human history. On distant battlefields, in far-off oceans, and high in the skies above, they faced down our enemies and gave their lives so that America would prevail. They made the supreme sacrifice so that our people can live in safety and our Nation can thrive in peace.”

He added, “We owe all that we are, and everything we ever hope to be, to these unrivaled heroes. Their memory and their legacy is immortal. Our loyalty to them and to their families is eternal and everlasting.

Stone and his wife, Nadia, were photographed on one of the boats, with the longtime Republican consultant greeting well-wishers with his imitation of Richard Nixon’s “double-V” sign.

Monday marked one of the first public appearances for Stone since Trump pardoned him in December last year.

Stone had been convicted in November 2019 of obstruction of justice, making false statements to Congress, and witness tampering in connection with special counsel Robert Mueller’s investigation into Russian interference in the 2016 presidential election.

He was sentenced to 40 months in prison, but Trump commuted his sentence in July 2020 to remove the jail time.

…Trump announced earlier this month that he would hold campaign-style rallies in the battleground states of Florida, Ohio, Georgia and North Carolina beginning in June, a sign that he may be testing the waters for yet another presidential campaign.