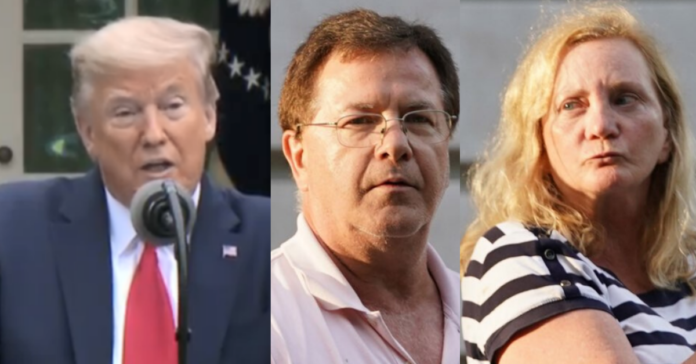 “They were going to be beat up badly, and the house was going to be totally ransacked and probably burned down like they tried to burn down churches,” the president added.

“These people were standing there, never used it, and they were legal, the weapons,” Trump said. “And now I understand somebody local they want to prosecute these people. It’s a disgrace.”

Mark McCloskey the homeowner who went viral for defending his St. Louis mansion said he expects to be indicted soon by the circuit attorney.

He went on Tucker Carlson’s show last night to explain why and what is at stake in his case.

Fox News host Tucker Carlson: Mark McCloskey joins us tonight. Mark, thanks much for coming on. So before I ask you about how you feel about this to reimagine public safety you been subjected to, tell us specifically what happen when the police visited your home recently.

Mark McCloskey: Well, you know, the police were really very professional and very nice. The cops that came out to issue the search warrant on us, they were almost apologetic. They didn’t want to have to be there. They were doing their job. Patty wanted to take a picture to document it and she asked if they wouldn’t mind facing away from the camera so that people wouldn’t get mad at them if their faces were shown on TV. They all did so. They unfortunate are stuck between a circuit attorney that wants to prosecute us in their own belief that we did absolutely nothing wrong.

Carlson: It goes without saying, I mean, police department’s are structured along the lines of the military. They don’t make independent. They are told what to to do and they do it. They didn’t make this decision independently but you still can escape the contrast of what happened the night the mob came to your home and you call the police and they didn’t, and then they come at the command of the prosecuting attorney later to take the firearm you used to defend yourself. Is that what police are for, do you think?

McCloskey: Well, you know, my attorney advised me not to be on the show tonight because the rumor is that we are going to be indicted shortly. Having said that, this is the same circuit attorney that released 35 of the protesters that torched and looted in downtown St. Louis but now she wants to indict me. I didn’t shoot anybody. I just held my ground, protecting my house, and I’m sitting here on television tonight instead of dead or putting out the smoldering embers of my home.

Carlson: So I mean, your strategy in response to all this seems to be staying silent doesn’t get to anything, obviously. If you just retreated into your house, it probably would be burned to the ground, as you just said. But is that how society should function? I mean, shouldn’t someone in authority in the state of Missouri be coming to your aid right about now?

McCloskey: You know, the way I view it is, when you have certain elements of society encouraging violence, at the same time asking the police to stand down, what’s the only possible result? The only possible solution is for individual citizens to stand up and defend themselves. I’m afraid that what’s being promoted is causing citizens to stand up and defend themselves so they can be [inaudible] and abused the way we have been.

Mark McCloskey says that he believes that he and his wife are going to be "indicted shortly". pic.twitter.com/8o4xsb82Az

Transcript from The Daily Wire.