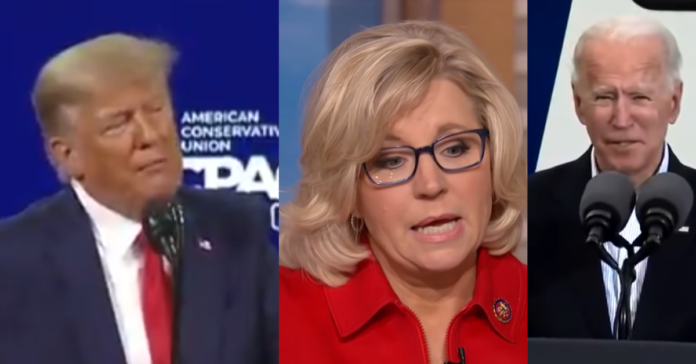 Former President Trump broke his silence at a blistering CPAC speech where he put the RINOs in the GOP on notice. He went after Liz Cheney and others by name before hinting he may just have to run in 2024 to finish the job he started.

“I want you to know that I am going to continue to fight right by your side,” Trump said.” Get rid of them all,” Trump said of Cheney and the others. “The RINOs that we are surrounded with will destroy the Republican Party and the American worker.”

“We are not starting new parties,” Trump said putting that rumor to rest. “We have the Republican Party, it’s going to unite and be stronger than ever before. I am not starting a new party.”

“Wouldn’t that be brilliant? Let’s start a new party, divide our vote, so we can never win,” Trump said to laughter.

“The future of the Republican Party is as a party that defends the social, economic, and cultural interests and values of working American families — of every race, every color, and every creed,” Trump said.

He said Biden “sold out to the teachers’ unions.”

“There’s no reason whatsoever why the vast majority of young Americans should not be back in school immediately. The only reason that most parents do not have that choice is because Joe Biden sold out America’s children to the teachers’ unions.”

“They’re cheating the next generation of Americans out of the future that they deserve and they do deserve this future,” Trump said. “They’re going to grow up and they’re going to have a scar.”

“We all knew that the Biden administration was going to be bad — but none of us even imagined just how bad they would be, and how far left they would go,” Trump said.

“In just one short month we have gone from America first to America last,” Trump said.

He hinted that he would run again in 2024 — “Who knows?” he said before saying falsely he won against Biden, “I may even decide to beat them for the third time.”

The former president easily topped the conference’s annual straw poll. Fifty-five percent of CPAC attendees said they would vote for Trump in a 2024 Republican presidential primary in their state if it took place today.

Notably, however, Florida Gov. Ron DeSantis finished second with 21%. CPAC was held in DeSantis’ home state, but he has gained more 2024 buzz recently, topping figures in his home state, like Sens. Marco Rubio and Rick Scott. That comes despite DeSantis struggling in his handling of the COVID-19 crisis.

With Trump not on the ballot, DeSantis was the top choice, followed by South Dakota Gov. Kristi Noem. Both made speeches this weekend and were received warmly.

Sens. Ted Cruz of Texas and Josh Hawley of Missouri did not fare as well, polling at 2% and 1%, respectively, with the crowd — despite the attention they have gotten for their objections to the 2020 election results.

TRUMP: "There's no reason whatsoever why the vast majority of young Americans should not be back in school immediately. The only reason that most parents do not have that choice is because Joe Biden sold out America's children to the teachers' unions." #CPAC pic.twitter.com/cqvJofpQ5S