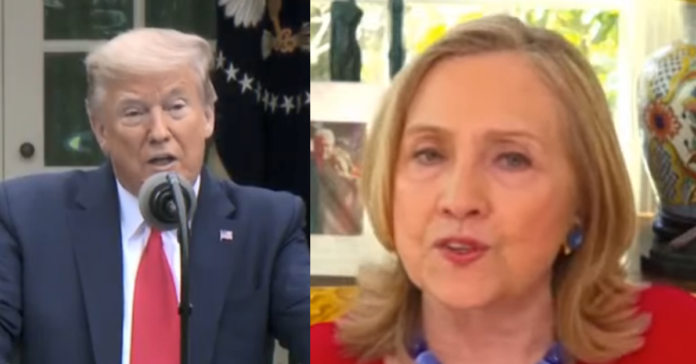 Former President Donald Trump took a victory lap after an IG report stunned the media and said the infamous DC park clearing was planned by police before Trump walked across the square to visit the church. Trump also took time to denounce the witch hunt he faced in office and put Hillary Clinton on notice saying she and the DNC should be held accountable.

Trump said: “Now that I have been totally exonerated on the Mueller Witch Hunt with a charge of No Collusion, I have often wondered, if a fake investigation is illegally started based on information provided and paid for by the DNC and the Clinton campaign, shouldn’t they be held accountable?

“Not to mention, wasting tens of millions of taxpayer dollars and interfering with years of a presidential administration? I fought the made-up Hoax strongly and effectively, and I won.

“Then they fabricated, out of thin air, the fake allegation that I obstructed justice, and I won that too. Think of it, how can you obstruct justice when you were fighting a false and illegally submitted narrative?

“This week I have been totally exonerated by the Inspector General in the clearing of Lafayette Park, despite earlier reports that it was done for political purposes.

“And I have also been totally exonerated in Congress by the testimony of former White House lawyer Don McGahn. It came, it went, and it was a big “nothingburger.”

“But fear not, the Radical Left, country destroying, illegal Witch Hunts continue, and I will win those too!”

“Thank you to the Department of the Interior Inspector General for Completely and Totally exonerating me in the clearing of Lafayette Park.

“As we have said all along, and it was backed up in today’s highly detailed and professionally written report, our fine Park Police made the decision to clear the park to allow a contractor to safely install antiscale fencing to protect from Antifa rioters, radical BLM protestors, and other violent demonstrators who are causing chaos and death to our cities.

“In this instance, they tried burning down the church the day before the clearing,” Trump said.

IG Report: U.S. Park Police did not clear Lafayette Square of protesters on June 1, 2020, for Trump.

The Park Police learned of Trump's interest in the site several hours after they had already started plans to clear the area to put up new fencing.

The IG's Report could not be clearer: the media narrative was false from start to finish.

Plans to clear the Park were made before anyone knew Trump was coming. Some journalists, like @MZHemingway, said this at the time, but were "debunked" and declared liars by "fact-checkers." pic.twitter.com/G1i5jJm7GT