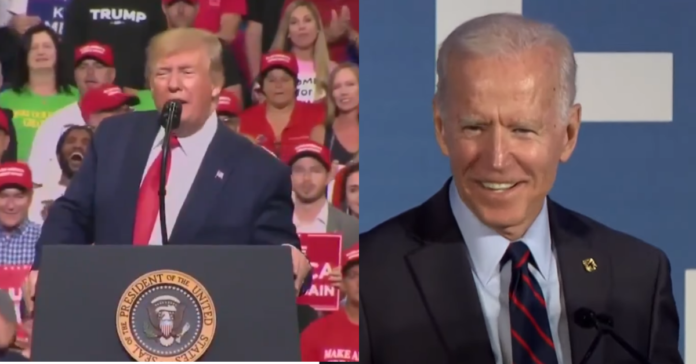 President Trump just put the entire Democratic party and the media on notice – they underestimate him at their own peril.

Trump just crushed the Dems with a massive fundraising number in the first 24 hours of his official kickoff.

He also packed a 20,000 seat arena to the rafters and not one Dem other than Obama could do the same.

From Yahoo: President Trump held a rally in Orlando on Tuesday night billed as the kickoff to his reelection campaign. And according to the Republican National Committee, he received nearly $25 million in contributions in less than a day.

RNC Chair Ronna McDaniel announced Wednesday that Trump raised a “record breaking $24.8M in less than 24 hours for his re-election.”

“The enthusiasm across the country for this President is unmatched and unlike anything we’ve ever seen!” she tweeted.

RNC chief of staff Richard Walters told Yahoo News that the total is a combination of the amount raised by the Trump campaign and Trump Victory, the joint fundraising arm for the campaign and the RNC.

The RNC took in $10.8 million from major donors at two fundraising events, while the Trump campaign raised $8 million through a phone drive and about $6 million in online donations. (The average online donation was $44, Walters said.)

Biden took in $6.3 million, the largest first-day total for any of the 2020 Democratic presidential candidates. According to Biden’s campaign, the money was raised from nearly 97,000 individual donors across all 50 states.

From Seanhannity.com: President Trump confirmed this week that more than 100,000 people requested passes to hear his high-stakes speech in Orlando Tuesday night; with massive lines forming hours before the Commander-in-Chief is set to kick-off his 2020 re-election campaign.

“It was a sea of red under the sweltering sun Tuesday as thousands of Trump supporters, decked out in MAGA-inspired attire, waited outside the Amway Center hours before the president’s arrival,” reports Fox News.

“He kept his promises, he is passionate about America. He wants to keep us safe, I am tired of people hating on him. He is doing his best to defend us,” Alan Machapento, a New Jersey native, told Fox News. “I am watching the Dow, we have the lowest unemployment ever.”

“From the moment he said he was running, I was a Trump fan,” said another supporter. “He is not a politician, and I am so glad my grandson is going to grow up in an America that is great.”

“There are a lot of mothers and women sitting in jail and they are (working on reforms),” said another woman on the President’s efforts to promote criminal justice reform. “We need to believe in America and we are on the right track. It is Congress that is not.”

“The Fake News doesn’t report it, but Republican enthusiasm is at an all time high. Look what is going on in Orlando, Florida, right now! People have never seen anything like it (unless you play a guitar). Going to be wild – See you later!” tweeted Trump.

@realDonaldTrump has raised a record breaking $24.8M in less than 24 hours for his re-election. The enthusiasm across the country for this President is unmatched and unlike anything we’ve ever seen! #trump2020 #KeepAmericaGreat