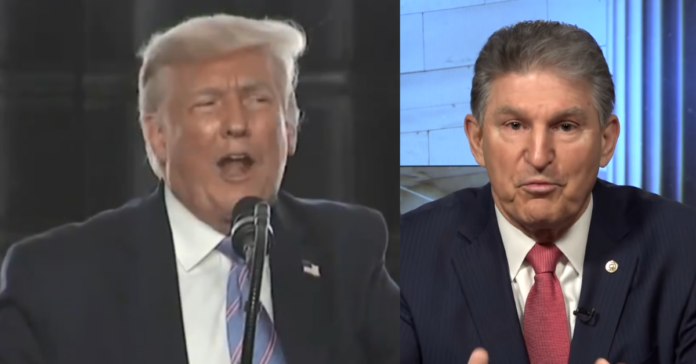 “Otherwise you’re packing the Court, you’re doing all sorts of very, very bad things that were unthinkable and were never even brought up during the election. Nobody brought this stuff up. Bernie Sanders can’t believe it. This is so radical liberal, radical left, Bernie Sanders can’t believe it. This is far more than he ever even talked about. They cannot, the most progressive —they use the term progressive — but the most radical left people cannot believe what’s happening,” Trump said.

The pressure on Manchin to cave has been intense. “We call on you and the Senate Democratic caucus to eliminate the filibuster as a weapon that Sen. McConnell can use to block efforts to defend and strengthen our democracy and make our government work for the American people,” Fix Our Senate demanded of Senate Leader Charles Schumer.

“Manchin is not pushing us closer to bipartisanship. He is doing the work of the Republican Party by being an obstructionist, just like they’ve been since the beginning of Biden’s presidency,” Bowman said.

Manchin eloquently wrote about his decision to save the filibuster, “The right to vote is fundamental to our American democracy and protecting that right should not be about party or politics. Least of all, protecting this right, which is a value I share, should never be done in a partisan manner.

“During my time as West Virginia’s secretary of state, I was determined to protect this right and ensure our elections are fair, accessible and secure. Not to benefit my party but all the people of West Virginia. For example, as secretary of state I took specific actions to establish early voting for the first time in West Virginia in order to provide expanded options for those whose work or family schedule made it difficult for them to vote on Election Day. Throughout my tenure in politics, I have been guided by this simple philosophy — our party labels can’t prevent us from doing what is right.

“Unfortunately, we now are witnessing that the fundamental right to vote has itself become overtly politicized. Today’s debate about how to best protect our right to vote and to hold elections, however, is not about finding common ground, but seeking partisan advantage. Whether it is state laws that seek to needlessly restrict voting or politicians who ignore the need to secure our elections, partisan policymaking won’t instill confidence in our democracy — it will destroy it.

“As such, congressional action on federal voting rights legislation must be the result of both Democrats and Republicans coming together to find a pathway forward or we risk further dividing and destroying the republic we swore to protect and defend as elected officials.

“Democrats in Congress have proposed a sweeping election reform bill called the For the People Act. This more than 800-page bill has garnered zero Republican support. Why? Are the very Republican senators who voted to impeach Trump because of actions that led to an attack on our democracy unwilling to support actions to strengthen our democracy? Are these same senators, whom many in my party applauded for their courage, now threats to the very democracy we seek to protect?

“The truth, I would argue, is that voting and election reform that is done in a partisan manner will all but ensure partisan divisions continue to deepen.

“With that in mind, some Democrats have again proposed eliminating the Senate filibuster rule in order to pass the For the People Act with only Democratic support. They’ve attempted to demonize the filibuster and conveniently ignore how it has been critical to protecting the rights of Democrats in the past.

“It has been said by much wiser people than me that absolute power corrupts absolutely. Well, what I’ve seen during my time in Washington is that every party in power will always want to exercise absolute power, absolutely. Our founders were wise to see the temptation of absolute power and built in specific checks and balances to force compromise that serves to preserve our fragile democracy. The Senate, its processes and rules, have evolved over time to make absolute power difficult while still delivering solutions to the issues facing our country and I believe that’s the Senate’s best quality.

“Yes, this process can be frustrating and slow. It will force compromises that are not always ideal. But consider the alternative. Do we really want to live in an America where one party can dictate and demand everything and anything it wants, whenever it wants? I have always said, “If I can’t go home and explain it, I can’t vote for it.” And I cannot explain strictly partisan election reform or blowing up the Senate rules to expedite one party’s agenda.

“The truth is there is a better way – if we seek to find it together.

“The Voting Rights Act, for example, was monumental in the fight to guarantee freer and fairer elections in the United States. Since its original passage, it has been reauthorized with overwhelming bipartisan votes five separate times. In addition, there is bipartisan support to pass the latest iteration of this legislation, the rightfully named John Lewis Voting Rights Advancement Act.

“The John Lewis Voting Rights Advancement Act would update the formula states and localities must use to ensure proposed voting laws do not restrict the rights of any particular group or population. My Republican colleague, Sen. Lisa Murkowski, has joined me in urging Senate leadership to update and pass this bill through regular order. I continue to engage with my Republican and Democratic colleagues about the value of the John Lewis Voting Rights Advancement Act and I am encouraged by the desire from both sides to transcend partisan politics and strengthen our democracy by protecting voting rights.

“Of course, some in my party have argued that now is the time to discard such bipartisan voting reforms and embrace election reforms and policies solely supported by one party. Respectfully, I do not agree.

“I believe that partisan voting legislation will destroy the already weakening binds of our democracy, and for that reason, I will vote against the For the People Act. Furthermore, I will not vote to weaken or eliminate the filibuster. For as long as I have the privilege of being your U.S. senator, I will fight to represent the people of West Virginia, to seek bipartisan compromise no matter how difficult and to develop the political bonds that end divisions and help unite the country we love.

“American democracy is something special, it is bigger than one party, or the tweet-filled partisan attack politics of the moment. It is my sincere hope that all of us, especially those who are privileged to serve, remember our responsibility to do more to unite this country before it is too late,” he wrote.

Donald Trump praises Joe Manchin for “doing the right thing” by refusing to end the filibuster.

The filibuster is being used to stop an investigation of Trump's role in the January 6th coup attempt. pic.twitter.com/dsDzOCyaAZ

"[Manchin's] dug in. He thinks this works for him in West Virginia. This is a state that Donald Trump won more than comfortably twice now. It's a state where Manchin is really the last Democrat playing in this sandbox" – @GarrettHaake w/ @NicolleDWallace pic.twitter.com/Yx83iLvxIT