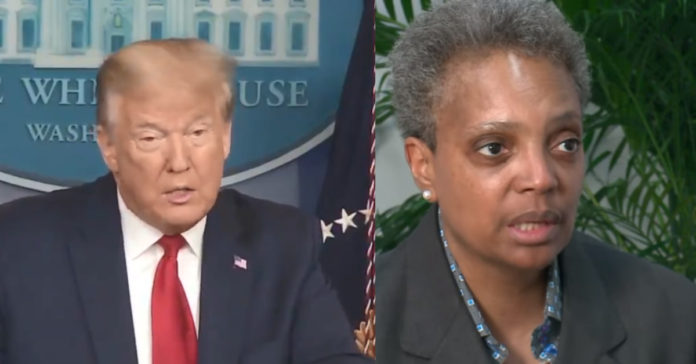 Chicago Fraternal Order of Police president John Catanzara posted an open letter to federal authorities saying he has lost faith in Mayor Lori Lightfoot saying she is a complete failure who cannot maintain law and order in that city.

“Mayor Lightfoot has proved to be a complete failure who is either unwilling or unable to maintain law and order here. I would be willing to sit down anytime and discuss ideas about how we can bring civility back to the streets of Chicago. These politicians are failing the good men and women of this city and the police department.”

Today Trump answered the cops call for help and announced he will send the Feds to Chicago to help get the violence under control.

From The Chicago Tribune:

The U.S. Department of Homeland Security is crafting plans to deploy about 150 federal agents to Chicago this week, the Chicago Tribune has learned, a move that would come amid growing controversy nationally about federal force being used in American cities.

The Homeland Security Investigations, or HSI, agents are set to assist other federal law enforcement and Chicago police in crime-fighting efforts, according to sources familiar with the matter, though a specific plan on what the agents will be doing had not been made public.

One city official said the city was aware of the plan but not any specifics. The Department of Justice and DHS in Washington did not immediately respond to requests for comment.

One Immigration and Customs Enforcement official in Chicago, who asked not to be named because they were not authorized to speak on the matter, confirmed the deployment was expected to take place. The official noted that the HSI agents, who are part of ICE, would not be involved in immigration or deportation matters.

It was unclear where all the agents would be coming from, though many were expected to be from agencies operating in the Chicago area. Questions remained about the chain of command they would fall under.

“The Chicago Police Department does not maintain any authority over the federal government’s deployment of federal law enforcement agents to the City of Chicago. We regularly work alongside our local and federal law enforcement agency partners toward the common goal of keeping Chicago residents safe,” the statement read. “If federal agents are deployed, it is critical that they coordinate with the Chicago Police Department and work alongside us to fight violent crime in Chicago.”

Federal agents being used to confront street protesters in Portland, Oregon, has raised alarm in many circles. Chicago, too, has dealt with protests that have led to injuries in recent days.

Trump pledges to deploy federal agents to Chicago and other U.S. cities led by Democrats https://t.co/qFQLdDHOap