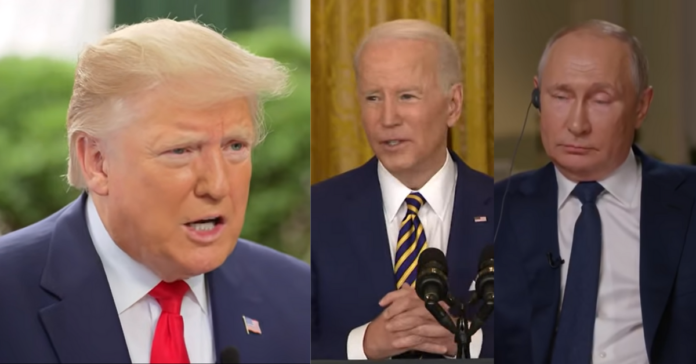 President Joe Biden had the worst year of any modern president. But his team of Twitter celebrities doesn’t see it that way. They think Biden had a good year. Blind to reality, they won’t change a thing and thus are doomed to fail.

So rather than try a real ‘reset’ Biden’s team let Joe finally talk to the media after hiding him for a year. America quickly learned the reason why Biden was absent when he almost started world war three by making the flub heard round the world seeming to greenlight Russia’s invasion of Ukraine.

Biden came out and tried to clean it up and made it worse. Kamala went on television and did no better. Ukraine’s President had to come out and rebuke the hapless Biden while other allies in Europe watched horrified at the blunder.

Putin recognizes strength and he can smell Joe Biden’s weakness a mile away. Enter former President Donald Trump who sent a warning to Vladimir Putin not to invade via GOP Senator Lindsey Graham.

“He said Putin is realizing that Biden’s weak, but he doesn’t realize that Biden won’t be around in 2024. So President Trump said today if they invade Ukraine, the Russians, it will make it impossible for any future president to have a normal relationship with Russia.” Graham said this “was a pretty damn wise observation.”

Graham added that Putin could not invade Ukraine “and get away with it” with Trump as president unlike with the current occupant of the White House.

“So, again, here is the problem. Biden seemed as weak from Russia, China and our allies on Afghanistan.  If he’s seen as being weak on Ukraine, we’ll be back here six months from now talking about that minor incursion into Taiwan. The whole world is watching. Afghanistan set a poor precedent for Joe Biden.

“Fair or not — the Biden administration will tell you for two hours they did exactly what they needed to do, and it was a success in the end, and we’ll let historians debate that, but Putin and Xi and our NATO allies are not debating that right now. They see Joe Biden as weak. Yesterday’s press conference did not help.”