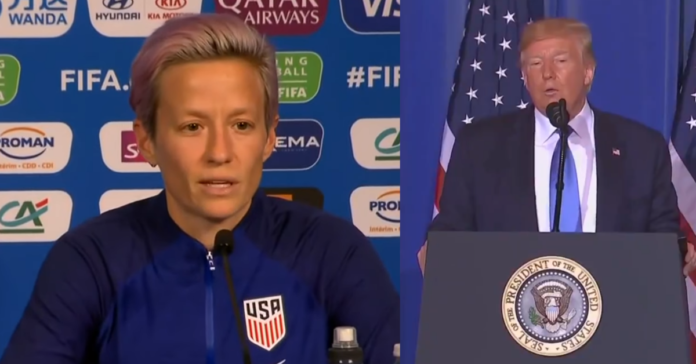 The anti-Trump star of the US women’s soccer team has been benched for today’s big game against England.

Megan Rapino shot to infamy with a huge and very public feud with President Trump, never a good idea for a national team player.

Now, we do not know whey she was benched and we do not know if she will play at all – the coach said she would discuss it after the match. Stay tuned.

From CBS: When the United States women’s national team takes on England at 3 p.m. ET in the Women’s World Cup semifinals — stream via fuboTV — there will be familiar face on the bench for Jill Ellis. After scoring a brace in back-to-back games and soaring atop the Golden Boot leaderboard with five goals this tournament, Megan Rapinoe will start the game on the bench in favor of Christen Press. The team has not provided a reason for the change, and we likely won’t heard much until the match is over.

As expected, Lindsey Horan slides back into the starting XI, but it’s not the most surprising move made thanks to Rapinoe’s benching. Press is more than capable of handling the load at left wing and the United States is incredibly deep with depth on the bench. It’s just not often you see a player that been on a goal-scoring tear on the bench for non-injury-related reasons.

The US team have dropped their captain Megan Rapinoe in a shock move ahead of tonight’s World Cup semi-final clash against England – as Prince William and Holly Willoughby led celebrities sending good luck messages to the Lionesses on social media.

England players were seen warming up on the pitch at the Stade du Lyon, which is already thronging with thousands of supporters – as another 10million prepare to watch the action back home on BBC1.

Phil Neville’s team suffered a late blow when goalkeeper Karen Bardsley was ruled out with a reported hamstring injury and Carly Telford had to be drafted in.

Prince William joined a host of sport and TV stars in wishing England good luck as the players prepared for the game by posting a series of motivational posts on social media.

In a video message William said: ‘I’m really looking forward to tonight. Millions of people are watching. Good luck girls. You showed great quality throughout the tournament. Come on England.’

Viewing figures for the match, which is being shown live on BBC One, is expected to eclipse the 7.6million who tuned in for the quarter final win against Norway, as fans watch at home or pack out pubs and bars across the country.

Victory would make them the first England team since 1966 to reach the final of a World Cup, and it would smash their semi final hoodoo having been beaten at the same stage of the 2015 tournament and Euro 2017.

Megan Rapinoe is OUT of the USWNT lineup vs. England. #FIFAWWC

Asked U.S. official if she's healthy: "Jill will deal with that after the game"