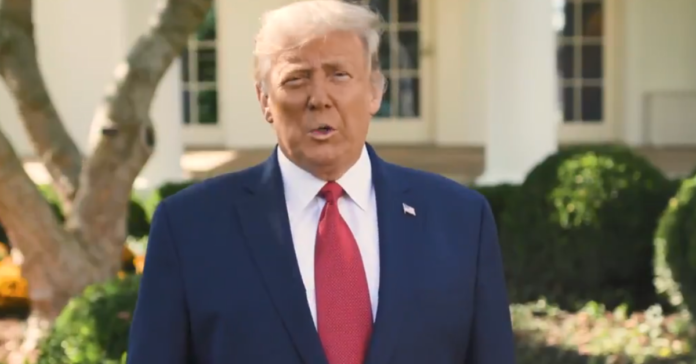 Trump said: “On this Memorial Day, we remember the fallen heroes who took their last breaths in defense of our Nation, our families, our citizens, and our sacred freedoms. The depth of their devotion, the steel of their resolve, and the purity of their patriotism has no equal in human history.

“On distant battlefields, in far-off oceans, and high in the skies above, they faced down our enemies and gave their lives so that America would prevail.

“They made the supreme sacrifice so that our people can live in safety and our Nation can thrive in peace. It is because of their gallantry that we can together, as one people, continue our pursuit of America’s glorious destiny.

Trump continued, “We owe all that we are, and everything we ever hope to be, to these unrivaled heroes.

“Their memory and their legacy is immortal. Our loyalty to them and to their families is eternal and everlasting.

“America’s warriors are the single greatest force for justice, peace, liberty, and security among all the nations ever to exist on earth. God bless our fallen Soldiers, Sailors, Coast Guardsmen, Airmen, and Marines.

“We honor them today, forever, and always.”

According to the Congressional Research Service (CRS), more than 1 million American service members have died in the history of the United States, dating back to the Revolutionary War. The most deadly conflicts were the Civil War and World War II, which killed more than 400,000 Americans each.

The United States’ most recent war, the Global War on Terror, has killed more than 6,900 American service members, according to the CRS.

From The History Channel:

Memorial Day is an American holiday, observed on the last Monday of May, honoring the men and women who died while serving in the U.S. military. Memorial Day 2021 will occur on Monday, May 31.

Originally known as Decoration Day, it originated in the years following the Civil War and became an official federal holiday in 1971.

Many Americans observe Memorial Day by visiting cemeteries or memorials, holding family gatherings and participating in parades. Unofficially, it marks the beginning of the summer season.

The Civil War, which ended in the spring of 1865, claimed more lives than any conflict in U.S. history and required the establishment of the country’s first national cemeteries.

By the late 1860s, Americans in various towns and cities had begun holding springtime tributes to these countless fallen soldiers, decorating their graves with flowers and reciting prayers.

Today we turn our thoughts to those who had the courage to fight for our freedoms and paid the ultimate price. We are forever indebted. #MemorialDay pic.twitter.com/nmdIrHXNvx