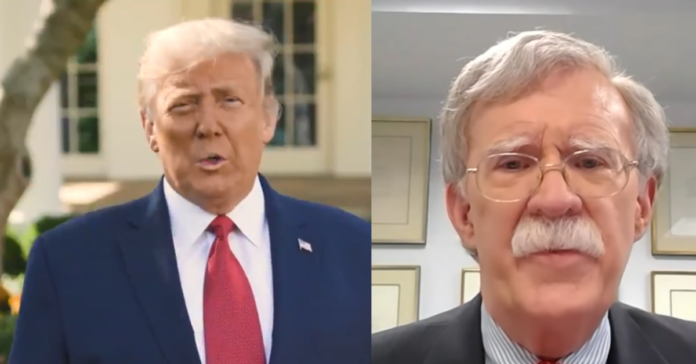 Former President Donald Trump dropped the hammer on ‘failed warmonger’ John Bolton after Bolton pushed a poll he commissioned to try to trash Trump and paint him as weak and losing power in the GOP.

Trump issued a statement through his leadership PAC where Trump’s favorite pollster John McLaughlin disputed Bolton’s numbers and said Trump’s endorsement carries a ton of weight in the GOP.

“Polling continually shows that when President Trump endorses, it almost always clears the field and puts his America First candidate on the path to victory,” McLaughlin said. “That’s why everybody is coming to Mar-a-Lago for his support.”

“John Bolton’s failed warmonger views are completely out of touch with today’s Republican Party and the majority of Americans,” McLaughlin added.

“President Trump’s successful America First policies kept us safe. This is a big reason why Republicans want him to run again.”

“We were motivated in part because of the palpable discrepancy in our public discourse between what commentators, politicians and others assert about the present and future status of the Republican Party, and the evidence they possess to support their contentions,” Bolton said when he released his poll.

“Clearly, we face a ‘rhetoric gap,’ a significant disjunction between opinions and facts,” Bolton said. “One of our principal objectives here is to contribute to closing that rhetoric gap.”

“There didn’t appear to be the recognition that things changed on Jan. 20, that Trump had gone from sitting in the most powerful office in the world to sitting by the swimming pool at Mar-a-Lago and that that’s going to have an effect over time as it is for any president who leaves office,” Bolton said.

“I think he’ll talk about it incessantly until then for the attention that it gets, but I think most of the candidates are preparing for a race in which Trump doesn’t participate and protecting against that contingency,” he said.

“John Bolton has never recovered from being fired. President Trump used Bolton’s idiocy to the benefit of Americans in negotiating deals with other countries because they knew Bolton was a crazed lunatic, and if he was in the room, they’d be concerned,” Trump spokesman Jason Miller said.

That survey showed the number of GOP voters who view the former president “very favorably” sinking 19 percentage points since a separate poll from a different pollster was fielded in October.

It also found that half of Republican primary voters are unswayed by Trump’s opposition to certain candidates.

The poll was commissioned by Bolton’s super PAC and conducted by veteran North Carolina GOP pollster Carter Wrenn. It’s based on responses from 1,000 general election voters, including 600 Republican voters, and does not specify when the poll was fielded.

The margin of error for the entire sample is 3.1 percentage points. For the Republicans surveyed, it’s 4 points.