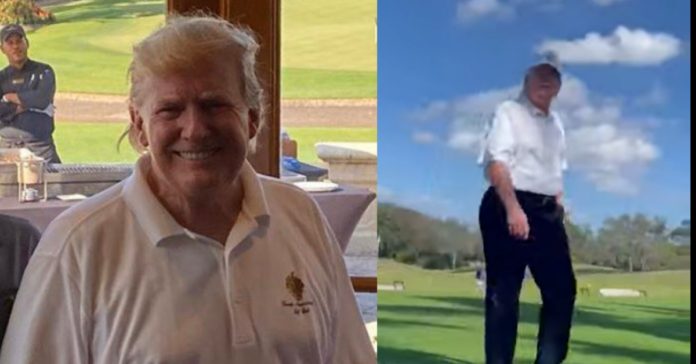 President Trump is still actively involved in GOP politics we learned in the last few days as party leaders flew down to visit him in Florida while other officials touted their calls of support from Trump during what may be a big fight over the future of the Republican Party.

Trump has dropped a few hints about his future political plans with many thinking he will run again in 2024. And he just did again in the video below.

He has also suggested he is working on getting the GOP back in control of Congress. Trump raised – some reports say $200 million while others say $81 million – a lot of money while he was contesting the election with most of it still unspent.

Some of the money went to his legal fight, some went to the RNC to help the GOP in the Georgia runoff while most went to his new Save America PAC.

Trump has suggested he will spend that cash in the 2022 midterms.

This week as Trump was leaving his golf course in Florida, a fan thanked him for his service and filmed a shot but telling interaction with the former President of the United States.

“Mr. President, thank you for your service sir,” the man said.

“Thank you, we haven’t finished yet,” Trump responded.

“Good, good,” the man with the camera said before another man can be heard shouting in agreement.

“Exactly”, another man said off to the side.

The Trump campaign’s fundraising shows no signs of abating, though Election Day was over a month ago. Since November 3, the campaign, Republican National Committee, Trump Victory and Trump Make America Great Again joint committees, and President Trump’s new political action committee, Save America, have collected $207.5 million in donations, his campaign announced Thursday.

“These tremendous fundraising numbers show President Trump remains the leader and source of energy for the Republican Party, and that his supporters are dedicated to fighting for the rightful, legal outcome of the 2020 general election,” campaign manager Bill Stepien said in a statement…

And the portion designated for Save America coffers has increased since the leadership PAC was established on November 9. The campaign website originally said 60% of donations would go to the Save America PAC and then hiked it to 75%.

The president has broad latitude in how he spends the cash raised for his leadership PAC, but there are some restrictions. He can’t pay his campaign’s legal bills with those funds, for instance.