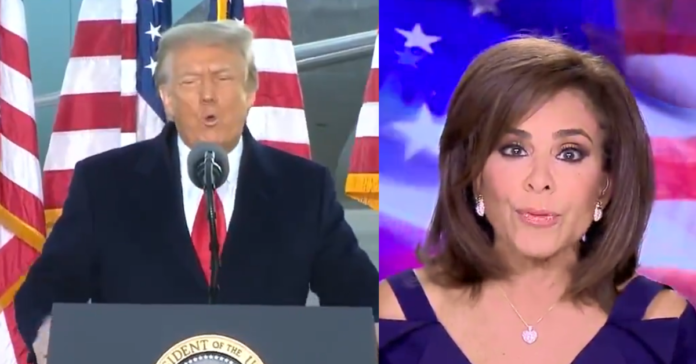 President Trump had one last pardon up his sleeve or was lobbied hard as he flew home to Florida because he just issued one final pardon.

Albert Pirro was convicted in 2000 of conspiracy and tax evasion for illegally deducting over $1 million in personal expenses as business write-offs.

The conviction came at the same time Jeanine Pirro was serving as the Westchester County district attorney and was considered a contender for the GOP nomination to run for U.S. Senate in New York.

Jeanine Pirro has been one of Trump’s most outspoken defenders on Fox News, and the president called in to her Saturday night show periodically. She was spotted at the White House multiple times throughout Trump’s term.

The pardon for Albert Pirro came roughly 10 hours after Trump granted clemency to more than 100 people in one of his final acts as president, and it again reflected how most of the president’s pardons and commutations were given to allies or politically connected individuals.

With less than an hour left in office, President Trump granted one more pardon — this time to Albert Pirro Jr, the ex-husband of Judge Jeanine Pirro, who was convicted on conspiracy and tax evasion charges.

Trump granted one additional pardon in final hours of his presidency to Albert J. Pirro, the ex-husband of Trump ally and Fox News personality Judge Jeanine Pirro. (Via WH pool)