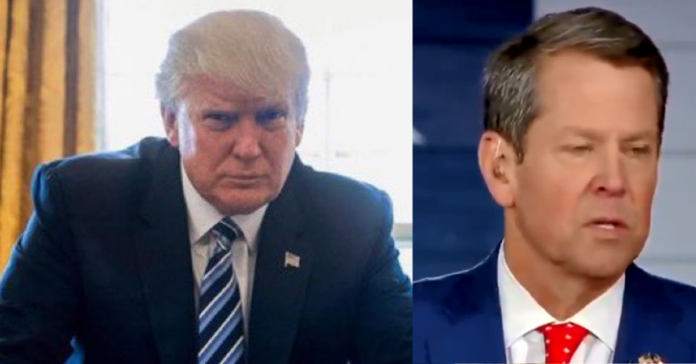 President Trump has filed a new lawsuit against Georgia to try and decertify the 2020 election results.

The complaint filed on New Year’s Eve. This was before The Washington Post leaked the tape between Trump and Georgia officials.

Attorneys for Georgia Gov. Brian Kemp and Secretary of State Brad Raffensperger were not happy saying it will “disenfranchise millions of Georgia voters at the thirteenth hour.”

“By virtue of these violations and as described in the Complaint, the Defendants certified an unconstitutional and unlawful Presidential election in Georgia,” lawyers from Georgia Attorney General Christopher Carr’s office said.

“There have been numerous suits filed since the November 3, 2020, general election, challenging most of the issues set forth in Trump’s motion,” they added.

“In all resolved suits, the claims have been flatly rejected.”

“Plaintiff does not seek a remedy disenfranchising any lawful votes — i.e., votes that are not illegal cast and thereafter validly counted,” the lawsuit argues.

The president accuses Georgia of violating the Georgia Elections Code, due process and the electors and elections clauses by ignoring “express directions regarding the collection, handling, processing, canvassing and counting of” mail-in ballots, as well as “improper certification of elections.”

Georgia Gov. Brian Kemp and Raffensperger responded to the lawsuit by saying 5 million Georgians, as well as the state’s electors, voted lawfully for the next president of the United States in the 2020 election.

The total number of votes in the recount results certified on Dec. 7 and posted on the secretary of state’s website was 766 fewer than the number certified when the ballots were first tallied after the election.

Biden’s lead dropped from 12,670 to 11,779. That appears to be largely due to a discrepancy in Fulton County, the state’s most populous county, which includes most of Atlanta.

“The election, certification and casting of ballots are final and over,” the response reads.

“The matter is now before Congress as set forth … to count the certified votes.

Georgia has completely complied with all requirements under the United States Constitution, federal and state election law.”