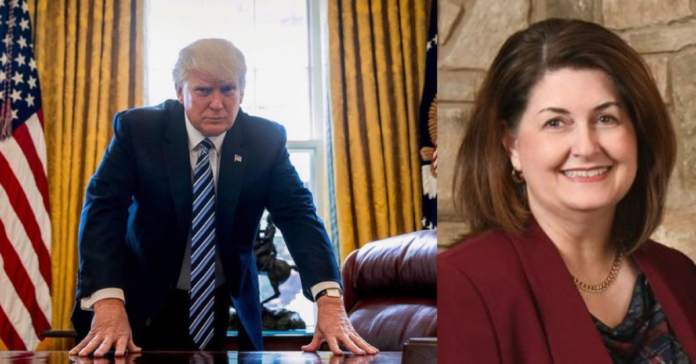 The Trump-backed candidate in a key Texas special election just called in the feds after she was smeared in a ‘disgusting’ robocall. Texas Republican congressional candidate Susan Wright called in the FBI after her supporters reported back to her campaign that they had been receiving robocalls that accused her of killing her late husband.

“This is illegal, immoral, and wrong. There’s not a sewer too deep that some politicians won’t plumb,” Wright said. The robocall claims that “according to confidential sources” Wright “obtained a $1 million life insurance policy on the life of her husband six months before his death.” The call then says Wright “tearfully confided in a nurse that she had purposely contracted the coronavirus.” Her husband, U.S. Rep. Ron Wright, had been undergoing treatment for cancer since 2018 and died shortly after testing positive for COVID.

The call goes as far as to say the hospital “has made a formal criminal referral to the Federal Bureau of Investigation, and they have now opened a formal criminal inquiry into the matter. It is clear that the voters of Texas’ 6th Congressional District deserve to know the truth about Susan Wright and her involvement in the death of her husband.”

“When we heard reports of this criminal smear of a voicemail attacking Susan, we immediately referred the matter to law enforcement and started cooperating with authorities,” Matt Langston, a Wright campaign consultant, said.

“Susan’s opponents are desperate and resorting to disgusting gutter politics because they know she’s the frontrunner.

From The Texas Tribune:

Former President Donald Trump is stepping up his involvement in the final hours of the Saturday special election to fill the seat of the late U.S. Rep. Ron Wright, R-Arlington.

Trump — who endorsed Wright’s widow, conservative activist Susan Wright, for the seat on Monday — is hosting a tele-town hall for her on Thursday night, The Texas Tribune has learned. The town hall is being put on by the Club for Growth, the national conservative group that endorsed Susan Wright on Wednesday.

The Club for Growth has also launched an 11th-hour radio ad to spread the word about Trump’s endorsement, which came on the second-to-last day of early voting. The minute-long spot warns that “out-of-state anti-Trump forces” are working against Susan Wright and says the race “may be a key test of Trump’s continuing power in the party.”

The race is arguably the first major electoral gauge of Trump’s clout within the party since he left office in January. He made an endorsement in another special congressional election last month in Louisiana, but it was far less competitive. Trump has made clear he plans to remain a force in GOP politics moving forward.

Susan Wright, a member of the State Republican Executive Committee, is one of 11 Republicans on the ballot Saturday, which features 23 candidates total — and is likely to go into a runoff. While she secured Trump’s backing Monday, it came as at least two GOP rivals continue to tightly align themselves with the former president, possibly stirring confusion about who he is truly supporting in the crowded special election.

One GOP candidate — Brian Harrison, the former chief of staff at the Department of Health and Human Services under Trump — has been airing broadcast TV ads showing him standing beside Trump in the Oval Office. Another Republican running, former pro wrestler Dan Rodimer, is leaning heavily on the fact that Trump endorsed him when he ran for Congress last year in Nevada, regularly advertising that he is the “only candidate [in the special election] to have ever received a Trump endorsement.”

NEWS – Texas GOP special election candidate Susan Wright has reached out to the feds after being the target of an 11th-hour robocall accusing her of "murdering" her late husband, Rep. Ron Wright