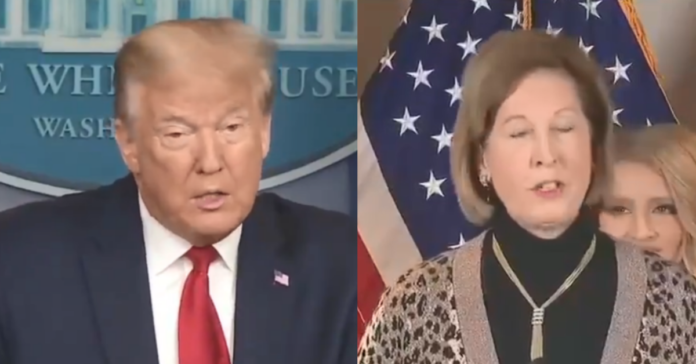 The statement from Rudy read, “Sidney Powell is practicing law on her own. She is not a member of the Trump Legal Team. She is also not a lawyer for the President in his personal capacity.”

Sidney, however. says she is still in the fight and released a cryptic statement to CBS News that said:

“I understand today’s press release. I will continue to represent #WeThePeople who had their votes for Trump and other Republicans stolen by massive fraud through Dominion and Smartmatic, and we will be filing suit soon…The chips will fall where they may, and we will defend the foundations of this great Republic. #KrakenOnSteroids”

The Trump campaign on Sunday sought to distance itself from attorney Sidney Powell after she made a series of increasingly convoluted and baseless allegations of widespread nationwide election fraud.

Christie told ABC “This Week” host George Stephanopoulos that it was time for Trump’s refusal to concede to end, adding to pressure building from members of the GOP to begin recognizing President-elect Joe Biden’s victory.

Stephanopoulos noted that Trump’s legal team had lost 34 court cases and that Trump had attacked Sen. Pat Toomey (R-Pa.) for calling on the president on Saturday to recognize the results of the election.

“Is it finally time for this end?” Stephanopoulos asked.

“Yes,” Christie responded. “The president has had an opportunity to access the courts. And I said to you, you know, George, starting at 2:30 a.m. on Wednesday morning, if you’ve got the evidence of fraud, present it. And what’s happened here is, quite frankly, the conduct of the president’s legal team has been a national embarrassment.”