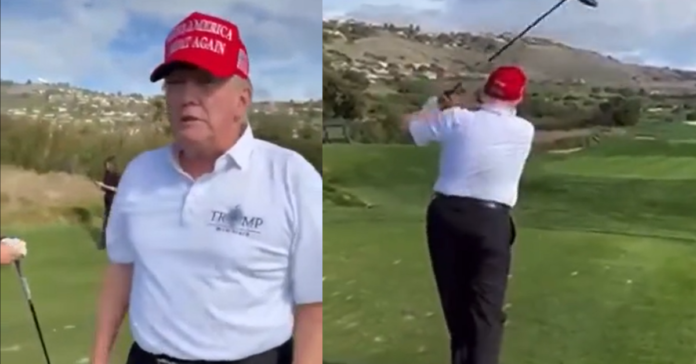 Former President Donald Trump dropped his biggest hint yet that he will run for the top office in the land again in 2024 at one of his golf courses recently. Video of Trump’s comment was posted on social media and quickly went viral.

An unseen narrator can be heard saying in the video below, “First on the tee, the 45th President of the United States…”

Trump turns to the camera and corrects the guy before taking his swing saying, “45th and 47th” as the small group erupted in approval. With President Joe Biden sinking in the polls and seeming to set a new low every week, Trump’s chances to win his old job back look good if he does indeed run again.

The New York Post reported, “President Biden’s approval rating has tanked to a new low of just 39 percent as his administration contends with a number of domestic and global concerns, a new poll shows.

“The abysmal rating was derived from the latest Harvard CAPS/Harris Poll. “This is a new low for President Biden as he struggles to solve a myriad of issues,” pollster Mark Penn said, according to the report.

That number is six points down from his approval rating in November, when he was at 45 percent, while his disapproval rating ticked up from 51 percent two months ago.

His 39 percent approval rating is the lowest since the poll first started gauging it in March.

The polling comes as the White House struggles on several domestic and foreign issues.

Inflation is causing economic concern nationwide, reaching the highest level in decades, in part fueled by the coronavirus pandemic