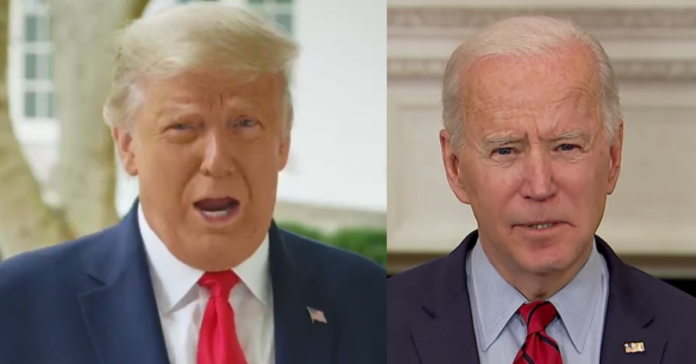 Former President Donald Trump dropped the hammer on President Biden over his handling of China, the Middle East, and the crisis at the border, telling Dick Morris in a Newsmax interview that his successor is “destroying our country.”

“If he would have done nothing, we would have had right now the strongest border in history,” Trump started. “I had everything worked out with the other countries, whether it’s Guatamala, Honduras, El Salvador, Mexico,” Trump said. “And even Mexico, stay in Mexico. In other words, these people ought to stay in Mexico, and they couldn’t get into our country.”

“And he ended that. It’s just crazy what they did. The question is do they do it out of incompetence, which I happen to think, or they do it because they really believe open borders are good for this country? Which they are not.”

“We had the strongest in the history of our country,” Trump said. Very few people crossing. Drugs were way down. Human trafficking was almost stopped. We did things that were amazing, and you take a look at what’s happening now. And let me tell you, they’re letting people from prisons.

“And we’re accepting them, because they’ve opened up the borders, Dick,” Trump said.

“I developed a very good relationship with Kim Jong Un,” Trump added. “We get no credit for that, but the fact is for four years, we had no problem. We were getting along. And now he’s very hostile toward Biden and the administration, very hostile, very, very hostile.”

“But he’s been very hostile and talking in very nasty ways to Biden.”

“I think what’s happened to Israel is one of the great injustices,” Trump said. “If you look back 10 or 12 years ago, Israel was so protected by Congress. Congress loved Israel.

“Now, especially if you looked at the House, the House doesn’t like Israel. The House is protective of anything other than Israel.”

“This is insane and it’s going to destroy women’s sports,” Trump said of the trans sports issue. Who’s going to – how do you compete?

“It’s so ridiculous. I can’t even believe we’ve got to have a conversation about it, actually,” Trump said.

As for Kamala Harris, she seems to be phoning in her job as border czar.

During a meeting with corporate CEOs from Chobabi, Microsoft, Nespresso, Mastercard, and others, Harris urged the executives to create jobs in Central America.

“Today, we are launching our call to action for businesses to invest in the Northern Triangle and that is one of the specific reasons that I’ve asked these business leaders to join us today,” Harris said. This focus includes … everything from digital inclusion to workforce development.”

I believe that the businesses, and particularly our private business sector, have a very significant role to play as we all know in creating jobs and promoting economic opportunity and in long-term development,” Harris continued.

“I am proud that we have companies already in the United States who have committed to act.”

Despite being put in charge of managing the nation’s illegal immigration crisis — which began after President Joe Biden signed a series of executive orders gutting enforcement of federal immigration law — Harris has yet to visit the U.S.-Mexico border.

As Breitbart News reported this month, many Democrats have now joined Republican lawmakers in requesting that Harris visit the southern border.