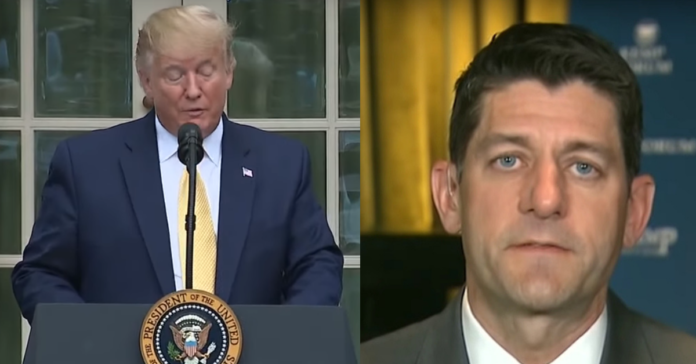 President Trump just broke his silence on the patented Paul Ryan backstab. Ryan has been the worst of the swamp for years.

A pretend intellectual, who was really just a radical, Ryan’s main goal was to gut Social Security and Medicare.

Two very unpopular positions and two positions Trump campaigned against. Remember, Trump and Steve Bannon wanted to raise taxes on the wealthy, and if Trump had done so he would easily win the rust belt and his reelection.

But Paul Ryan stopped him (with help from the Democrat’s Gary Cohn and Jared Kushner) and now Trump will have to fight it out.

Ryan is and always has been an economic fraud and a political fraud and now we know why – he is a coward. Trump, of course, would not sit and take Ryan’s insults and hit back today.

“Paul Ryan, the failed V.P. candidate & former Speaker of the House, whose record of achievement was atrocious (except during my first two years as President), ultimately became a long running lame duck failure, leaving his Party in the lurch both as a fundraiser & leader,” Trump tweeted.

Trump went on: “When Mitt chose Paul I told people that’s the end of that Presidential run. He quit Congress because he didn’t know how to Win. They gave me standing O’s in the Great State of Wisconsin, & booed him off the stage. He promised me the Wall, & failed (happening anyway!).”

“…He had the Majority & blew it away with his poor leadership and bad timing. Never knew how to go after the Dems like they go after us. Couldn’t get him out of Congress fast enough!” Trump finished.

Ryan said earlier: “I told myself I gotta have a relationship with this guy to help him get his mind right,” Ryan said, according to the book.

“Because, I’m telling you, he didn’t know anything about government … I wanted to scold him all the time.”

“We’ve gotten so numbed by it all,” Ryan added. “Not in government, but where we live our lives, we have a responsibility to try and rebuild.”

Ryan went on to say that people around Trump “helped to stop him from making bad decisions all the time.”