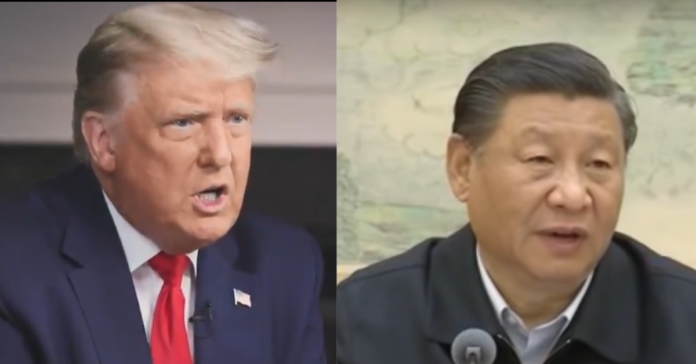 Former President Donald Trump dropped the hammer on Chinese obfuscation surrounding the origin of the virus demanding they pay ten trillion dollars to the USA and the world for unleashing the pandemic.

The virus origins, if the Chinese government does not come clean, may never be known but we do know what the Chinese government did in the aftermath – they locked down Wuhan but still allowed international flights from that city. They were not honest early and tried to cover it causing the world to lose valuable time needed to contain the plaque.

By the time China started acting like a responsible world power it was too late, the virus escaped and the rest is history. But Trump wants to write one more chapter – the settlement and do not be surprised to see Americans or world business groups sue the Chinese government over the pandemic.

“Now everyone, even the so-called ‘enemy,’ are beginning to say that President Trump was right about the China Virus coming from the Wuhan Lab.”

“The correspondence between Dr. Fauci and China speaks too loudly for anyone to ignore. China should pay Ten Trillion Dollars to America, and the World, for the death and destruction they have caused,” he added.

Trump has a busy summer with rallies and keynote speeches planned. On Saturday he’ll headline the North Carolina Republican Party Convention in Greenville, North Carolina and it was just announced he will headline a Conservative Political Action Conference event in Dallas next month.

Fox News Channel first reported Trump’s involvement in the CPAC event, which like the annual February conference Trump spoke at, will be hold under the America UnCanceled’ banner.

Matt Schlapp, the chairman of the American Conservative Union, the organizer of CPAC events, explained that theme means taking on the ‘Silicon Valley censorship czars’ and ‘woke school boards,’ among other alleged enemies of the conservative movement.

‘We’re honored that he’ll join us in Dallas and remind us that freedom means never being silenced,’ Schlapp told Fox.

He said a ‘corrupt alliance of Jim-Crow-shouting elected officials dead-set on cutting out voter ID, Silicon Valley censorship czars, woke school boards and corporate CEOs, and a legacy media operation on life support are working together to silence and cancel the voices and votes of conservatives.’

Trump has found himself without the help of Facebook or Twitter to get his message out since the January 6 MAGA Capitol attack.

He launched a short-lived ‘From the desk of Donald J. Trump’ blog, but killed the site on Wednesday.