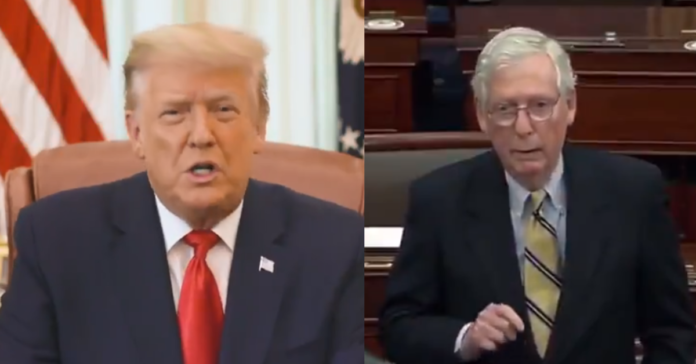 Senate Minority Leader Mitch McConnell, who seconds earlier voted to acquit Trump, lashed out at the former president and said he was guilty after he voted to acquit? It was odd behavior that no one understands.

“There’s no question, none, that President Trump is practically and morally responsible for provoking the events of the day. No question about it,” Mitch said. “The people who stormed this building believed they were acting on the wishes and instructions of their president. And having that belief was a foreseeable consequence of a growing crescendo of false statements, conspiracy theories, and reckless hyperbole which the defeated president kept shouting into the loudest megaphone on planet earth.”

Former President Trump took a victory lap, despite what Mitch said at the end, issuing a statement thanking his followers and promising more to come.

Trump wrote, “I want to first thank my team of dedicated lawyers and others for their tireless work upholding justice and defending truth.

“My deepest thanks as well to all of the United States Senators and Members of Congress who stood proudly for the Constitution we all revere and for the sacred legal principles at the heart of our country.

“Our cherished Constitutional Republic was founded on the impartial rule of law, the indispensable safeguard for our liberties, our rights and our freedoms.

“It is a sad commentary on our times that one political party in America is given a free pass to denigrate the rule of law, defame law enforcement, cheer mobs, excuse rioters, and transform justice into a tool of political vengeance, and persecute, blacklist, cancel and suppress all people and viewpoints with whom or which they disagree. I always have, and always will, be a champion for the unwavering rule of law, the heroes of law enforcement, and the right of Americans to peacefully and honorably debate the issues of the day without malice and without hate.

“This has been yet another phase of the greatest witch hunt in the history of our Country. No president has ever gone through anything like it, and it continues because our opponents cannot forget the almost 75 million people, the highest number ever for a sitting president, who voted for us just a few short months ago.

“I also want to convey my gratitude to the millions of decent, hardworking, law-abiding, God-and-Country loving citizens who have bravely supported these important principles in these very difficult and challenging times.

“Our historic, patriotic and beautiful movement to Make America Great Again has only just begun. In the months ahead I have much to share with you, and I look forward to continuing our incredible journey together to achieve American greatness for all of our people. There has never been anything like it!

“We have so much work ahead of us, and soon we will emerge with a vision for a bright, radiant, and limitless American future.

“Together there is nothing we cannot accomplish.

“We remain one People, one family, and one glorious nation under God, and it’s our responsibility to preserve this magnificent inheritance for our children and for generations of Americans to come.

“May God bless all of you, and may God forever bless the United States of America.”

My guess is this won’t age well…pic.twitter.com/qZAEszAJuR

NOT GUILTY. Now maybe it would be nice if the senators stopped putting on show trials for free air time and actually started working for the American people for a change.