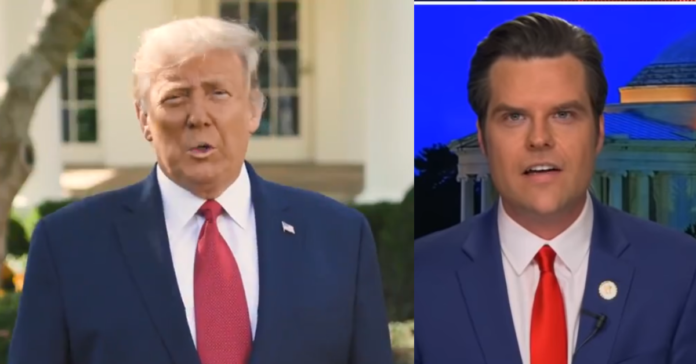 Former President Trump broke his silence on the federal investigation into Florida Congressman Matt Gaetz today. Trump has remained on the sidelines as much remains unclear with the probe but after the New York Times reported that Gaetz asked Trump for a pardon Trump finally made a statement.

He denied that Rep. Matt Gaetz (R-Fla.) directly asked him for a pardon before reminding America that Gaetz has denied the allegations made against him.

“Congressman Matt Gaetz has never asked me for a pardon,” Trump said in a statement. “It must also be remembered that he has totally denied the accusations against him.”

The New York Times reported yesterday that Gaetz asked White House officials for blanket preemptive pardons for himself and other allies of Trump.

According to the report, Gaetz was afraid of a witch hunt by the new administration but the Times now suggests he may have been trying to get out from under the federal probe.

The allegations have prompted calls for Gaetz to resign, though Republicans have remained largely silent on the matter. Trump is the highest profile figure to offer some cover for Gaetz.

Prior to news of the investigation, the Florida lawmaker was said to be contemplating retiring from Congress for a media job.

In a text exchange with The Hill last week, the Florida Republican said rumors he plans to resign from his office are “false” and it is “very safe” to say he doesn’t have any intention to do so.

Gaetz has appeared regularly on cable television to praise Trump, and he was among the most prominent conservative voices pushing back on each of Trump’s impeachments.

Trump was reportedly mulling preemptive pardons for a number of allies in the waning weeks of his presidency, including his adult children, Rudy Giuliani and even himself. But he ultimately opted against…

Trump breaks silence re: Gaetz. “Matt Gaetz has never asked me for a pardon. It must also be remembered that he has totally denied the accusations against him.” Important note: story said Gaetz approached WH officials and it was unclear if he talked directly to Trump about it. https://t.co/U28edl59BB