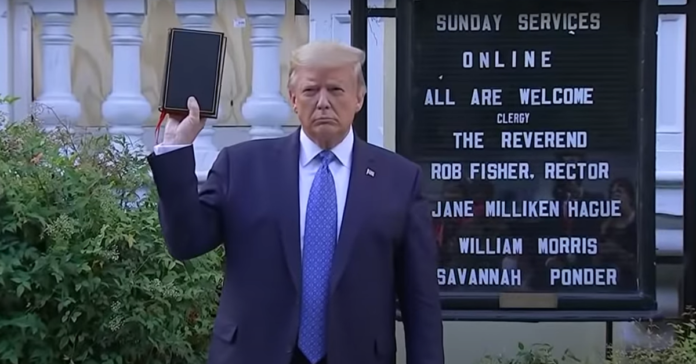 “As we have said all along, and it was backed up in today’s highly detailed and professionally written report, our fine Park Police made the decision to clear the park to allow a contractor to safely install antiscale fencing to protect from Antifa rioters, radical BLM protestors, and other violent demonstrators who are causing chaos and death to our cities. In this instance, they tried burning down the church the day before the clearing,” Trump said.

CNN’s Jim Acosta was not impressed saying: “And I have to say, when I read through this report, it sounded as if this inspector general was auditioning to become the inspector general at Mar-A-Lago because this is almost a whitewash of what occurred on June 1st.

“I certainly think it raises more questions than it answers, the Park Police cleared the park with the purpose of setting up this fence because obviously the protesters needed to be moved back from this area where they were defacing statues and potentially pulling down the Andrew Jackson statue and so on.

“I was in the Rose Garden that day when Trump gave that speech and said ‘I’m going to go to this special place,’ talking about the church, and you could hear the Park Police and other Federal forces, DC police, clearing that park, they were violently pummeling protesters, tear-gassing protesters.”

The independent Inspector General of the Interior Department, Mark Lee Greenblatt released a letter announcing his findings that said: “Over the course of this review, our career investigative staff conducted extensive witness interviews, reviewed video footage from numerous vantage points, listened to radio transmissions from multiple law enforcement entities, and examined evidence including emails, text messages, telephone records, procurement documents, and other related materials. This report presents a thorough, independent examination of that evidence to assess the USPP’s decision making and operations, including a detailed timeline of relevant actions and an analysis of whether the USPP’s actions complied with governing policies.

“The evidence we reviewed showed that the USPP cleared the park to allow a contractor to safely install anti-scale fencing in response to the destruction of Federal property and injury to officers that occurred on May 30 and May 31. Moreover, the evidence established that relevant USPP officials had made those decisions and had begun implementing the operational plan several hours before they knew of a potential Presidential visit to the park, which occurred later that day. As such, we determined that the evidence did not support a finding that the USPP cleared the park on June 1, 2020, so that then President Trump could enter the park.

For more than a year, it has been consecrated media fact that former President Donald Trump and his White House, on June 1 of last year, directed the U.S. Park Police to use tear gas against peaceful Lafayette Park protesters, all to enable a Trump photo-op in front of St. John’s Church.

That this happened was never presented as a possibility or likelihood but as indisputable truth. And it provoked weeks of unmitigated media outrage, presented as one of the most egregious assaults on the democratic order in decades.

This tale was so pervasive in the media landscape that it would be impossible for any one article to compile all the examples. “Peaceful Protesters Tear-Gassed To Clear Way For Trump Church Photo-Op,” read the NPR headline on June 1. The New York Times ran with: “Protesters Dispersed With Tear Gas So Trump Could Pose at Church.”

ABC News anchor George Stephanopoulos “reported” that “the administration asked police to clear peaceful protesters from the park across the White House so that the President could stage a photo op.”

The Intercept published an article stating that “federal police used tear gas and rubber bullets to clear protesters from Lafayette Square in front of the White House,” all to feature a video where the first interviewee said: “to me, the way our military and police have behaved toward the protesters at the instruction of President Trump has almost been Nazi-like.”Nazi-like. This was repeated by virtually every major corporate outlet.

At a June 2 Press Conference, then-Sen. Kamala Harris (D-CA) proclaimed with anger: “last night I watched as President Trump, having gassed peaceful protesters just so he could do this photo op, then he went on to teargas priests who were helping protesters in Lafayette Park.”

Speaking on MSNBC’s Morning Joe, House Speaker Nancy Pelosi exclaimed: “What is this, a banana republic?,” when asked about NBC News’ report that “security forces used tear gas and flash-bangs against a crowd of peaceful demonstrators to clear the area for the president.”

CNN’s Jim Acosta on the IG report that found no evidence Lafayette Park was cleared for President Trump’s visit to St. John’s:

“As I read the report, it sounded as if [the IG] was auditioning to become inspector general at Mar-a-Lago.”
pic.twitter.com/zRyj4osdAW

The IG who issued this report is a DC official from the *Obama years.* He obtained proof showing the decision to clear the Park was made well before Trump decided to go to the Church.

Liberals still refuse to believe it because they adore corporate media & want to be lied to. pic.twitter.com/b7rbUtTZVh

“‘Are these people still going to be here when POTUS comes out?’ Mr. Barr asked ….The operations commander replied , ‘Are you freaking kidding me?’ and then hung his head and walked away …. Shortly after that, the confrontation turned violent.” https://t.co/6sC4sKGav0