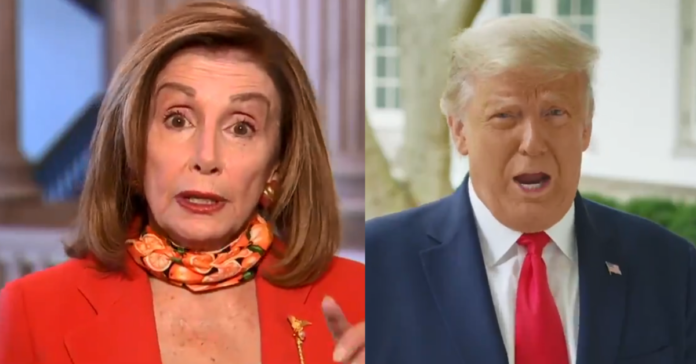 President Trump and Speaker Nancy Pelosi (D-Calif.) are on track for an epic collision over President Trump’s southern border wall.

While Washington is consumed by Trump’s legal challenges tough votes are fast approaching regarding spending and debt and as in years past Trump’s insistence on funding more border wall construction is putting Pelosi in a tight spot.

But that is not all, the Dems want to claw back earlier wall funding and they have a poison pill in their bill to stop Trump from moving money around like he did last time (no word on how they will stop him if they couldn’t last time).

Senate Appropriations Committee Chairman Richard Shelby (R-Ala.) said negotiators are “close” to settling those top-line numbers but declined to comment on what the funding number for the wall is likely to be.

But whatever the agreed-upon amount, many Republicans are predicting Trump is going to put up a fight for more wall funding.

“It’s extremely critical, and I think he’s going to go to the mat on the border wall. And I think a lot of Republicans are going to go with him,” said Ford O’Connell, a GOP strategist.

“The immigration issue is about being pro-worker and pro-jobs, and that is important to the Trump message going forward. And if Republicans don’t put up on this, they’re worried that the base will lose faith in them on one of their issues,” he added.

Biden has pledged to reinstate the Deferred Action for Childhood Arrivals (DACA) program to shield immigrants who came to the country at a young age from deportation and to overturn the travel ban on people visiting the U.S. from majority-Muslim countries.

Groups on the left are urging Pelosi to stand strong in opposing new money for the border wall. They also want Congress to decrease funding for Immigration and Customs Enforcement and Customs and Border Protection.

“We are opposed to any additional border wall funding. This is a signature issue for Trump, building his border wall, which by the way he claimed Mexico would pay for. He has received $4 billion from Congress for his border wall, but in addition to that he has illegally siphoned money from the other parts of the government,” said Madhu Grewal, federal immigration policy counsel at the American Civil Liberties Union.