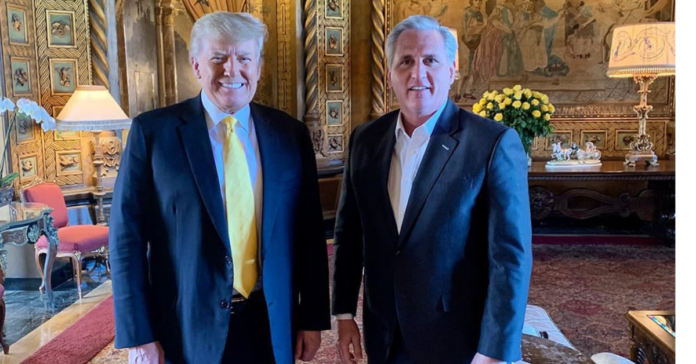 Kevin McCarthy went down to Florida to plan and prepare for the future of the GOP and you cannot do that with Donald Trump. In what should scare the Dems, the two men put their differences aside and united with a common goal – to win back the House.

“President Trump has agreed to work with Leader McCarthy on helping the Republican Party to become a majority in the House,” the president’s super PAC, “Save America,” said about the meeting.

“They worked very well together in the last election and picked up at least 15 seats when most predicted it would be the opposite. They will do so again, and the work has already started.”

“President Trump’s popularity has never been stronger than it is today, and his endorsement means more than perhaps any endorsement at any time,” a statement said.

“Today, President Trump committed to helping elect Republicans in the House and Senate in 2022,” McCarthy said.

“A Republican majority will listen to our fellow Americans and solve the challenges facing our nation.”

“Democrats, on the other hand, have only put forward an agenda that divides us — such as impeaching a President who is now a private citizen and destroying blue-collar energy jobs. For the sake of our country, the radical Democrat agenda must be stopped.”

“A united conservative movement will strengthen the bonds of our citizens and uphold the freedoms our country was founded on.”

McCarthy, who voted to reject electors for Biden from Pennsylvania, said earlier this month that Trump bore some responsibility for the violence.

In a private phone call, McCarthy told Trump left-wing protesters were not to blame for the violence, something the former president and some close allies have claimed.

McCarthy did not vote to impeach Trump earlier this month, but he did not actively urge members of his caucus to oppose the vote.

Trump has stewed over McCarthy’s comments and actions in the weeks since, and he is plotting with advisers about potentially backing primary challenges to disloyal Republicans.

BREAKING: In meeting with @GOPLeader McCarthy, Former President Trump agrees to help GOP take back the House in 2022

“President Trump’s popularity has never been stronger than it is today, and his endorsement means more than perhaps any endorsement at any time,” a statement said pic.twitter.com/qETVAgXVcD